Hi and good evening....
Just a few things I wanted to share with you.
Do you really like my characters shown here on my blog?? Do you love my logo? Pretty isn't it...and so me. I just bet cha if you got a hold of Mark and nogotiate with him as far as payment goes...I bet he could do some artwork for you too that is special to you. I have a few of Mark's artworks....and I have them loaded on my webshots program on my computer ....and when Micheangelique ( my computer) is kinda sleeping because I am busy and ignoring her...Mark's artwork and my family pictures I have rotate on my computer for wall paper. I know the artwork...makes for interesting veiwing. To be honest sometimes I don't know what to do on my computer and just sit and stare at the screen. It is a good thing there is something there besides....a blue plain ordinary screen. Anyhow...if you are interested in obtaining some artwork that is generated on a computer ...give Mark an email...I bet he would love to create something for you. I know he can be had...LOL. His email address is incase you are interested...
tatman@tat-man.net.
The other thing that will be going on for me tomorrow...which it is almost tomorrow now..it is really late here...my husband will not be actually going to work but to the Union Hall with a meeting with the company tomorrow that my husband works for. I have heard alot of talk from my husband about the union and the company stuff. I don't really understand it all since the only time I worked somewhere where there was a union at all was the VA Hospital that I use to work at many years ago when I was an LPN. But I don't remember any contact stuff from then going on. Anyhow....for over a year now my husband and fellow employees have been working without a contract. The company's goal is to get rid of the union and at the moment they are not recognizing the union my husband and other belong in. The company has already lost charges for unfair contract talks with the Labor Board here in New York. I know the company had planned to appeal the verdit. So alot will be riding on what happens tomorrow and my husband's future. I hope something comes out of the meeting and the company my husband works for are coming to the meeting with the real intention of getting a contract to the people and the union that everybody can be happy with. I know...this isn't tatting or lacing....but that is what will be on my mind tomorrow. For my husband could be on strike starting tomorrow and that will not be good news at all. So I am hoping for a good outcome.
The other thing that I will be thinking about...for I have to think positive here...is in October my laceguild ( The Fingerlakes Lace Guild) will be having our annual lacing weekend. I have had the registration forms for abit now. I have them filled out but have been waiting before sending them in. Money is really tight this year...and to be honest...if it was for the fact that I am the president of the lace guild....I would forgo going this year. I know I need to get it in the mail in the next couple of days to ensure hopefully getting into the lace class I am interested in taking. But I feel I can't send it in right now with everything up in the air sorta speak. But anyways here is the run down of the list of available class for Columbus weekend Lacing event.

Usually if I go...which I have for the past 6 or 7 years now...I go for the whole weekend and Monday. This year if I go I don't think I am going to include the Monday class...this way I will only be spending the night at the hotel one night instead of two. The Monday class is usually a continuation of the weekend class you were talking. I have been thinking of the Milanese Lace Jewerly with Radmila...whom I have met numerous times. I have never taken a class from her...but Milanese Lace Jewerly intriques me somehow. But there are alot of ifs right now...but if everything goes alright that is the class I am planning on taking.
I also love Carrickmacross Lace and have taken a class with Mary Shields before. As a matter of fact....she had seen some of the bobbins I painted when I was in her class. I had brought my pillow with bobbinlace on it in progress. She really liked the bobbins. She told me she would design a Carrickmacross pattern just for me if I painted some bobbins for her. Well...I did that. Mary is from Ireland and lives there. The year I took the needle lace class with her on Carrickmacross was right after the 9/11 happened. That was September as you all know and she was on a planed across the big pond to here the following month. I remember the other teachers we had that year were very nervous about flying which is most understandable. Anyhow...Mary designed this Carrickmacross fan that has the letter "S" in the middle of it with shamrocks going around. She also included fan sticks of mother of pearl , the net, the organdie and the butter paper to make the fan which is then suppose to be turned into a fan pin. I have yet to make this fan...and have been thinking I better do it before I see Mary...for I am sure she will be asking me how I did on the fan...and I would love to be able to show her the finished fan. I wouldn't mind taking another one of her classes. She is really very nice. 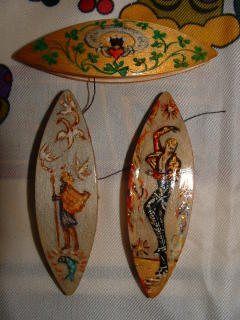 Mary also knows my friend Ann Keller of Ireland too. Her website url for Ann is: http://annmargaretkeller.com/ She paints shuttles and bobbins. She has also done books on Bobbinlace. I have just about all of her books. I also have done all the lace samples shown in her "Celtic Bobbinlace for Beginners" I was also apart of a group of lacers that were commissioned to make Bobbinlace for stage dancing costumes that I sent the finished lace that I made here to Ireland. I did this for a few years. Here are a couple pictures that shows you the shuttles that Ann has painted for me.


I also have some bobbins for bobbinlace that she has painted for me...but at the moment...they are on all my different pillows and part of a lacing project of some sort. Anyhow of those I have swans, a castle/Merlin pair, I have Irish dancers, I have all kinds she has done for me including a special bobbin she did just for me at my request. This was shortly after I returned home from Ireland. One of the things I remember well seeing in Dublin was the Georgian Doorways...and the Shamrock Streetlight poles. Those poles were so neat....and beautiful ...so I had asked Ann if she could paint me that Georgian Doorway and the Streetlight scene on a bobbin....this she did for me and sent it to me as a Christmas gift. It was one of her bobbins where you turn the bottom of the bobbin and a scene appears inside. I think they are called secret bobbins or something like that. Anyhow....once you turned the bottom of the bobbin my door of my Georgian Doorway opened and inside was a painted Christmas tree. Sometime I will take the bobbin off my pillow and get a picture of it to show you...opened and closed. It really is cool. The street light pole is also painted on the bobbin. She really liked my idea and thought about maybe using it on some other bobbins. I don't know if she did that or not...she asked me if I minded taking my idea and doing it on 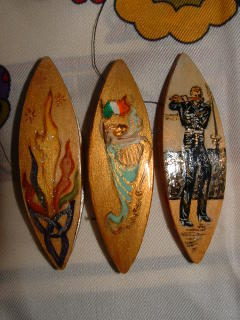 bobbins...I of coarse told her I didn't mind.
I guess this is enough writing for tonight. My son is now home from visiting his friends and wants the Hal computer ....and it is now time for me to hit the sack....I already tried to go to sleep once tonight...but with so much on my mind I got back up and found myself writing here again. I hope I made this post a bit interesting at least to someone.
Posted by Sherry aka Celtic Dream Weaver at 11:45 PM