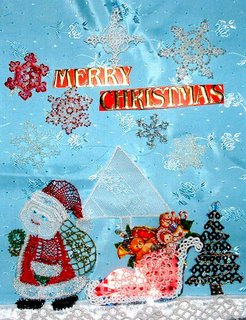 I wish you all a verrry MERRY CHRISTMAS and I hope your NEW YEAR will be ALL you could POSSIBLY WISH for....HAPPINESS.
Here is my Christmas card to you all.

Make sure you click on the Card to see it better.
Posted by Sherry aka Celtic Dream Weaver at 3:46 PM 1 comment: 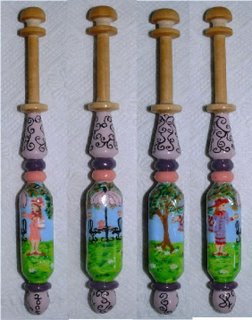 I was painting again the other day...and I don't know where it came from but whoosh...the idea of me and my friend Erin having a cup of Java on a nice Black Iron curly Qed table with an umbrella came into my mind. So I painted the scene...It isn't really good painting but it was fun just the same....I was getting a real hoot out of it while I was painting it...snickering to myself.

There I was in my purple and hot rod red...and there was Erin in her...Pinkie Taskadarol( I don't know how to spell that...but if you ever watched happy days...She was a friend of "The Fonz"...lol...It was fun...and I hope if Erin ever peeks in to my blog again...she will get a true kick out of it too...as I said...I had fun painting this one.

Earlier today I went off my merry way to Hector to Karey's house for a Tatting Christmas Planning the Hector event for next year party. There was lots of food...but for some reason today I was feeling very well...don't know if it was my allergies for I was in dusty parts of my house..and I mean my loft folks...I don't dust up there....LOL I am not "Monk" you know....So yesterday my head started bothering me and then again today...or it was because I was still tired from playing in the dust yesterday or...I don't know... but I wasn't myself so I didn't eat the ton of food that was there. I started working on a pattern of Karey's that I have. It is an angel..but I have just started the angel so I haven't gotten very far with her...to much gabbing and planning and chit chatting I guess..oh and lets not forget laughter too. Anyhow...we had a Tatting Exchange. Karey after drawing my package received my exchange and I think she was happy with it. I gave one of my tatted/bobbinlace ornaments and a few other things. I got a cute snowman that was tatted and I believe it is Debbie Arnolds pattern from Co. I also got a tatted weath. Both of these were from Ginny Weathers of Aurburn, New York. The tatting is just wonderful in these ornaments. I love them. We also got some thread samples to play around with and some more tatting thread from a grab basket. Anyhow it was a nice day.

After I got home I was watching Harry Potter and the Chamber of Secrets that was on TV and it was all I could do was to not fall asleep. Then I am such a sick puppy when it comes to Harry that I watched it again...Now I am writing this blog and calling it a night. Here is the pictures of the Tatted Ornaments I got from Ginny. 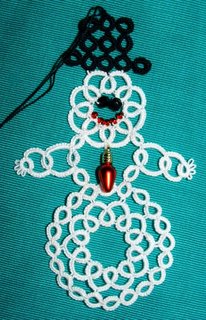 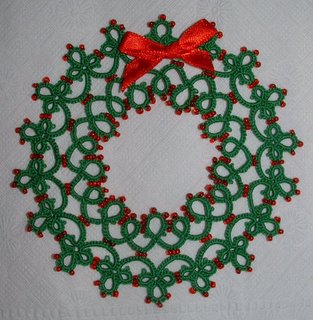 Posted by Sherry aka Celtic Dream Weaver at 11:08 PM 2 comments: 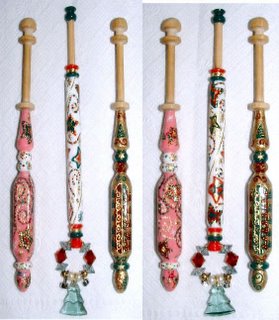 As you can see here I am trying really had to get myself into the X-mas spirit. My husband is still on strike. That makes things hard for I haven't any idea...what the future holds for us.
I have been busy making ornaments and painting mostly as you can see here.
I will be painting again today. Hopefully I will have done by next week all that I need to do.
We have snow on the ground... and I have a feeling it is staying for the temperatures don't look like they are on the incline.
Sometime soon I need to stop with the painting and ornament making and get my house ready for the holidays. It will be nice when I get that done....but just the thought of moving the furniture around, dragging all the X-mas stuff out...deck the tables...hang garland...and so on....I would rather be Bewitch and just twitch my nose and have it all done....or have Celtic get some of her magic tatting dust out...and tat the house into X-mas readiness.
Posted by Sherry aka Celtic Dream Weaver at 10:04 AM 2 comments:

This is a bobbinlace bookmark that I just finished today. The whole bookmark was made using metallic threads. The type of lace is called Torchon. I am not very good in Torchon lace making...actually it makes me shake in my Scooby Doo House Slippers....LOL. I am calling it my BlackGold Bookmark or Fool's Gold....

Posted by Sherry aka Celtic Dream Weaver at 3:02 PM 2 comments: