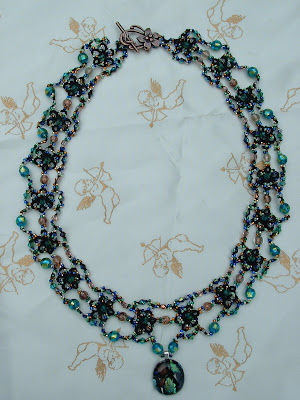 It is finished. My "Necklace for Laurie". Here is a picture of it. What do you all think that might be veiwing this blog...do you think my girlfriend Laurie will like it?
Posted by Sherry aka Celtic Dream Weaver at 11:33 AM 6 comments:

The continuing saga of...."Necklace for Laurie". Here is a picture of the necklace I am making for my girlfriend. You can see I have added another part to the necklace. Stay tune for this necklace isn't finished yet. 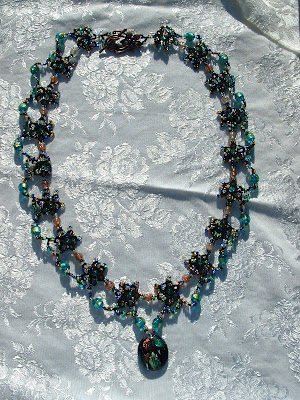 I see there is a new list forming for "Tatting Designers". I don't think I fit that catagory. I have only published one tatting pattern in IOLI magazine. I know I have graced a couple covers with my designs of same said magazine and I think I did a write up that was also published. But I do not have a book of tatting patterns. So I do not think I fit the catagory of designer. There is so much talent out there. IT is MIND BOGGLING!!
Posted by Sherry aka Celtic Dream Weaver at 9:03 AM 2 comments: 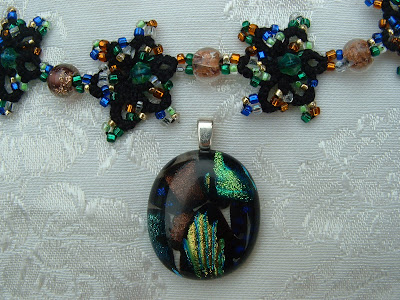 A couple weeks ago you might have remembered seeing a picture here on my blog of a necklace my girlfriend of about 30 years made for me. Well...here is the begining of the necklace I am making her. This was something we decided to do for one another during a craft festival that was at Canandaigua Lake in Kershaw Park. We each had a pendant and we were to make a necklace for each other using the pendant as a focal point. Hers is what is known as dichr 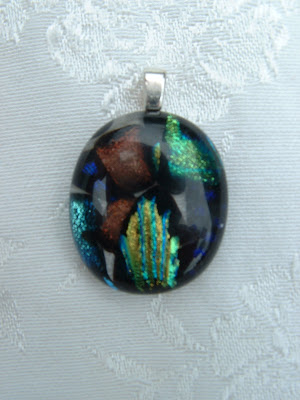 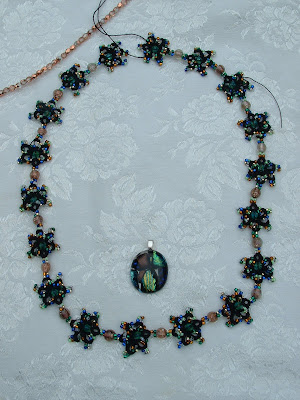 You can see a close up of the pendant here...and the very begining of the necklace here. I think so far the necklace is matching up pretty good with the pendant. This is only the begining of the necklace. I have a feeling by the time I am done with it...My girlfriend Laurie will be able to use it as a lethal weapon if she needs to....More to go for now though....stay tune for updated pictures of the necklace's progress....and no this is not a one way pattern...but a group of different elements to get the effect that I want when it is finished.

Posted by Sherry aka Celtic Dream Weaver at 3:12 PM 2 comments: 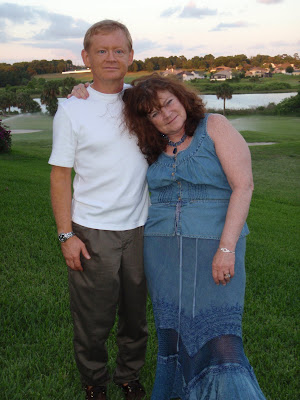 Last week I went to Florida to visit my brother and sister inlaw. They live in Orlando area. Anyhow...my brother was concerned about me when I was sick there earlier this year so he paid my airfare and had me come to him for a visit. It was a nice relaxing weekend. We sat on their porch( which they have bought a house now in Florida) and watched the different birds on the greens near the miniture lake which I was told there was an alligator or two...I didn't see any though. On Saturday morning I hope in the fold and went outside to do a bit of yard work...my job was the weeding of the front flowerbeds. Fun!!! NOT! but that is okay. I am glad they didn't have me sitting around looking like a wallflower anyways. The one thing that struck me as odd is the Florida people have a tendency to have their airconditioning on so high that poor me from New York was freezing. What is wrong with that picture I wonder??
But I had a good time...on Saturday My brother and my sister inlaw took me to see "Indiana Jones and the Crystal Skulls" which I enjoyed and then afterwards we went to one of my favorite resteraunts. MacRoni And Grill. Yum ...yum...I didn't eat all my food so I had it boxed and it became lunch for me the next day. The time flew so fast...and before you know it I was back on the plane for Rochester, New York.
The one doily I showed on an earlier blog I gave to Jill because I wanted to give her something nice. It was the one in purple, varigated purple and blues and pastel purple, yellow and blue...all the threads were Manuela size 20. She liked the doily.
Oh and one more thing....I actually saw the Space Shuttle go up from the parking lot in Orlando. That was pretty exciting ...I was just think then, how much more the excitement to be right near the launch pad.
Another reason for this post is drum rolllllling please......
Handy Hands
http://www.handyhandstatting.com/index.html
has two new books out. I know because my copies came in the mail today. Kinda funny I almost forgot about them with everything that went on this year. But......One of the books is by Christel Weidmann. It has all kinds of farm animals in the book. I proof tatted some of the critters that are in the book...but I didn't see all the he hawers so now I want to do the rooster, hen and the calf and so on...But here is a picture of the ones I did do...I thought I did the bull too...but I can't seem to find him right now. The patterns for the goose and gosling...I did a bit differently. I shoe laced and encapsulated my threads when I had to so I could get the orange where I wanted it to be...that is just me playing around.... 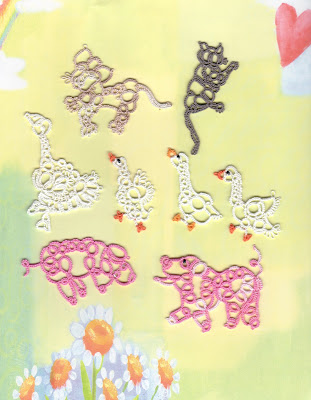 Here is a picture of the front and back of the book. You can see from the cover some of the other farm animals that are in this book. 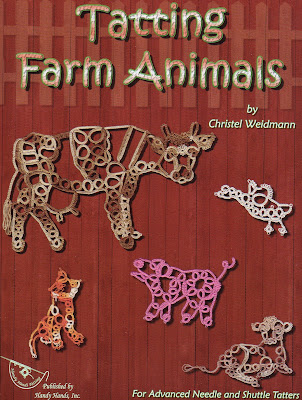 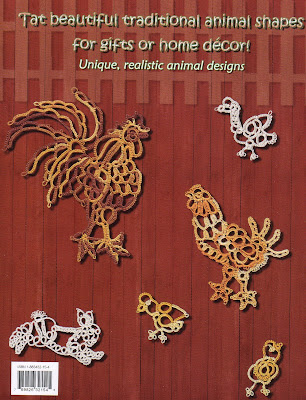 Here is a picture of the cover (front and back) so you can get an idea what is in this book. 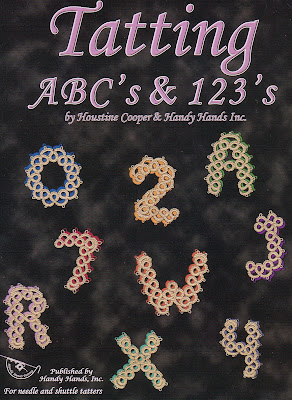 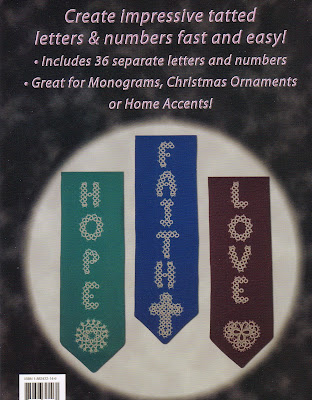 You can order either one of these books from Handy Hands....

Posted by Sherry aka Celtic Dream Weaver at 9:55 PM 5 comments: