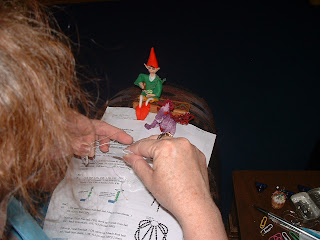 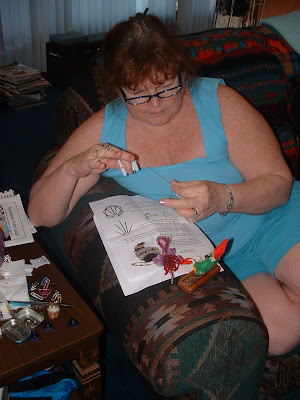 I don't have much to share right now. But ...today I have been working on proofing a pattern for Martha. And oh look...I have my little audience watching me tat and figure things out. I have Fergus Og my leprechaun belting out "A Song For Ireland" Fergus knows it is one of my favorite Irish songs. The melody is so pretty...but then there are others like "Fields of Anthenry," "Mary From Dungloe." just to name a few. I bought a CD when I was in Ireland years ago called "Favorite Irish Ballads" I bought it unheard by my ears but I am so glad I did for it is one of my favorite CDs and I have transferred this CD to my iPod so I can listen to it anytime. It is kinda funny but I just realized the musician on the CD are non other than the Irish Rovers. I remember some of the songs they did years ago. I might even have their records (remember those), that my parents had. Anyhow...next to Fergus is his trusted friend Connor MacLeod named after his favorite character Connor Macleod from the "Highlander" movies played by Christopher Lambert. Connor's tail was swishing to the ballads Fergus was singing. A couple of times they both got pretty rowdy and my shuttles, beads and all went flying. But they were enjoying the time we were spending together...Fergus...kept saying in between ballads..."is it done yet".
Gotta go now...the "Movie Star" will be here soon. I get to play Grandmother again tonight. :>)
Posted by Sherry aka Celtic Dream Weaver at 6:40 PM 4 comments: