Hi in Lacingland,
This morning we went on a wild goose chase to Geneva, N.Y. to see what we can do about getting some medical insurance. I guess I messed up on the date for our appointment. I guess it is next Tuesday...darn it ..... My husband is still on strike. I so much wish it would end. Everything is so messed up right now...the budget, getting our persrciptions without insurance ( and that is costly), my normal routine. I can't seem to get much done around here.
I have been working on designing another dragon. I worked on it a bit last night, working on the head of it. I am naming my dragon Sherbet. How is that for a wierd name?
The only good thing today is...I belong to a list that is for my favorite author. I have been counting down the days till...this one...her new book is out. Believe it or not...Canandaigua where I live is a city. But you wouldn't know it at times...we don't have a regular book store or music store here. So if you want the recent books or music you have to drive to Victor to the mall. So....I have asked my husband to please pick the book up for me. I know I shouldn't really have the book with things being so tight...but I have been waiting for today for quite some time. So instead of wasting gas to drive to the mall to get the book myself....I asked my husband to please pick it up for me either on his way to picket today or on his way home. So by tonight I should have the book since I called the bookstore this morning and they tell me they do have the book. The lady on the phone even knew what book I was interested in when I said..." My favorite author's new book is suppose to be out today." And she replied back to me, "You mean Diana Gabaldon?" And I said yes....and she told me they had the book.
Diana's book are always really thick...like between 800 to close to a 1000 pages long....so once I get the book tonight....I will be in a dilema...reading or working on my dragon. At the moment I am reading Patricia Cornwell's book "From Potter's Field". I am trying to finish it. Unlike tatting which I have this project going and that project going...I only like to read one book at a time...and I know I am not going to want to wait till I am finished with "From Potter's Field to be finished so I am reading feverishly right now. Is anybody else familar with Diana Gabaldon besides me who might be reading this post?
I might be quite for awhile ......don't worry...my brain cells will be firing......
Posted by Sherry aka Celtic Dream Weaver at 1:50 PM No comments: 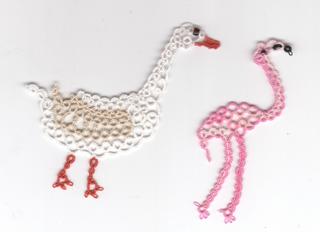 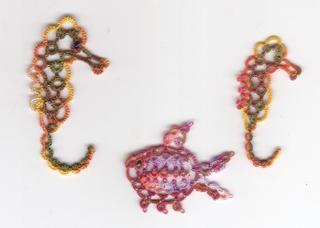 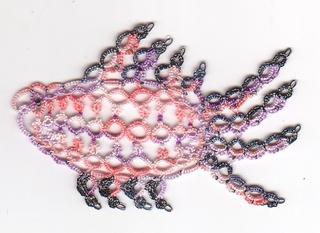 IT HAS BEEN A WHILE, HASN"T IT?
The strike is still going. I wish it would end. Have been on the phone so much trying to get help for medical insurance, working with the mortgage company...and just a whole bunch of stuff. Sending this...faxing that...stuff. Sighing......
Anyhow to get on a more fun mood I thought I would share some of the tatting I have done of Jane Eborall's patterns I have tatted.
I have also been working on designing another dragon pattern. I have a few ideas swimming in my head for tatted dragons. I am trying very ....very hard not to make these dragon designs hard to diagram out and make. I have a tendency to make things that are too difficult for me to diagram out...you know like my "Kelly" the Celtic Dragon. I could never diagram that out in a million years. Actually most of my stuff I have designed have no patterns. I just do them. First I draw my idea or design out...and then I do whatever I have to to make the design come out the way it is on either paper or in my head. But I am not good at doing diagram and stuff on my computer even though I have the art programs to do the diagraming. But I am going to really try really hard to get these dragons diagramed out once I have the tatted designs finished.
On Sunday I went to my lace guild meeting. I am the prez of the Fingerlakes Lace Guild here in New York. On Columbus Weekend we will be having our annual Lace Day Event. This year we will be celebrating 25 years of the lace guild. We are planning on having silver and blue star balloons on our tables and each one of us at the banquet will get to take home a champange glass that has on it Ithaca Lace Guild 25 years and the date I believe in silver. I could be wrong with what the exact wording is on the glass...but that is a cool idea I think.
At the meeting we all sat around spangling our commemorative bobbins that we are selling durring the event. I have done the bobbins for the past two years for the guild and even though I need the money right now...I am kinda glad I don't have that responsiblities to paint over a 100 bobbins and get them all spangeld. That is a whole lot of work.
I have been reading books by Patricia Cornwell lately. I think I am book number 4 right now. But what I am really waiting for is for my favorite author to come out with her new book which is suppose to be at the end of this month. Her name is Diana Gabaldon. She has written "Outlander", "Dragonfly in Amber", "Voyager", "Drums of Autumn","The Fiery Cross". Her new book is suppose to be "A Breath of Snow and Ashes" which is suppose to be out on September 27th, 2005. All of Diana's books are sequeled to each other ...and they are all 900 pages long, which means it takes me a bit to get through one of her books. It has been said that this one will be the last one for this series. It is really too bad for I have gotten use to reading on Claire and Jamie's adventures.
In the first book there is a battle that took place on April 16th,1746. The battle was at Culloden Field in Scotland. It was kinda funny but when I was in Scotland I went to Culloden Field...and looked around the moor and read up some on the real history of the battle that took place there. I believe it was the last battle between the English and the Scots but...I may be wrong. Not too sure. But it was really cool I remembered for I had by that time read about the battle in Diana's first book which was "Outlander". So I am waiting for the next installment to come out.
I do enjoy reading as well as doing alot of other things...especially books about history, which I have to admit Patricia Cornwell's books are not about history but about murder, and forensic stuff which I find interesting. I do like the show on TV called CSI so I guess that is why I have been enjoying Patricia's books.
This has gotten a wee bit long hasn't it.....? I guess I better say good nite .....till the next time I get the keyboard in front of me and my fingers are flying over the keys again......keep tatting, remember someone loves you....and that you are special.....
Posted by Sherry aka Celtic Dream Weaver at 12:17 AM 1 comment: 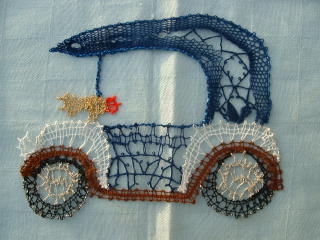 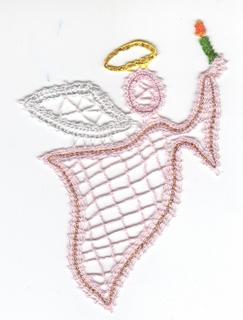 My husband is still on strike...so things have not changed here. I will continue to put some shuttles on ebay to sell that I have painted.
I think for this post I will let you see some of the bobbinlace that I have done in the past. At the moment I have a Honiton spider and web going, a bucks point edge going, a bedfordshire edge going and a torchon edge going. I really need to get my spider and web done...it is really redicuous how long that project has been on my pillow. I have this really cool Viking Ship pattern that is also Honiton lace that I want to get started on.
I happen to like things with Vikings...back in my knitting days I had this pattern and still have of a black and white Viking Ship sweater pattern. I would still like to do that someday.
I hope you enjoy the 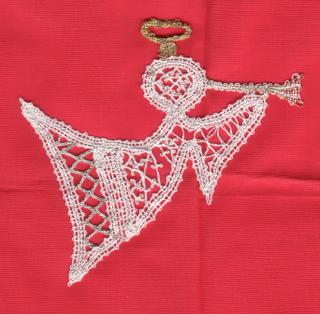 pictures.
I had fun making the angels which...I love angels btw. I made the car as a Christmas gift for a friend.

Next time I post I will share a picture of a bobbinlace Santa Claus that I made.
Posted by Sherry aka Celtic Dream Weaver at 6:07 PM 2 comments: 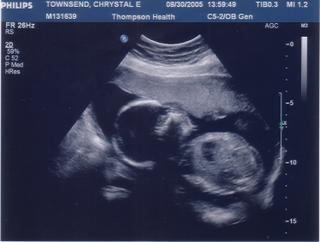 Erin, I think I may be able to top wierd....okay I can't....but what I can....is share the very FIRST picture of my new grandson to be taken... Chrystal jokes and calls him....their alien baby....You know what I mean....they look so funny at first....LOL But here he is....no name yet....but I did vote for Cameron and got shot down....Oh well....So here he is....
His head is to the left...he looks like he is looking up doesn't he...But he weighs 15 oz they figured. Dad was a ten pound baby when he was born and he is over 6feet tall now...so everybody is figuring it is going to be a big baby. I just hope this time there won't be any complications during the birth as when Timmy Guy was born. His lung collasped from the trauma of coming down the birth canal. When all was over and Tinmy Guy had to go to big hospital to go to a neonatal ward right after he was born. Chrystal was told if she had another baby that big that she would have to have a C-section. Timmy Guy weighed 8 pounds when he was born....so I will worry as time gets closer to popping my grandson out. Chrystal is due on Jan. 15th, 2006. Just think....I will get to hold him in five months or less.
Posted by Sherry aka Celtic Dream Weaver at 10:20 PM 3 comments: