Hiya everybody!
First of all I know some time has gone by since the Earthquake in Haiti occurred. I know they will need money for along time to come. I was thinking the other day that soon it will be hurricaine season and there are still so many without any shelter but a piece of flimcy material for cover. I know there is so much that still needs to be done in that country. I just know if I had another life that I would be there helping them as much as I can.
I know you can still buy the music from the special that was on TV to help raise funds for the victims of the quake. There is some great music from that show like Dave Mathews, and gosh...Neil Young. I still love Neil Young and the song they did for the event reminded me of the songs from Neil Young's album "Gold Rush" and also from the days of Cosby, Still, Nash and Young. I loved all of that music and still do. There is also a song called "Haiti Mon Amore'" which was performed by Bono, The Edge, Rhianna Jay-Z . The song sends chills down my back bone it is so pretty. I love the song. There is also Christine Aguilera,Sting,Beyance, Kid Rock, Sheryl Crow, Modonna, Justin Timberlake, Jennifer Hudson, John Legend, Taylor Swift, Coldplay,Bruce Springsteen, Alicia Keys. You can get all of this great music from the TV special from Itunes. It cost just under $8.00 and the great thing is all the money goes to help Haiti. I Hope some of you will go and get this beautiful music and help Haiti. I have listened and listened to this music that I got from ITunes soon after the show aired. I don't have alot of money these days...but at least I know my little bit will help those that are worse off than me. The name of the Album is "Hope for Haiti Now" . 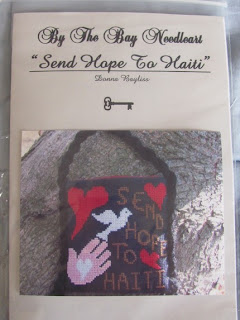 I have also purchased this cross stitch pattern from Etsy designed by Donna from "By the Bay" . Money from this purchase will also be going to Haiti to help others. Here is the URL for it
http://www.etsy.com/view_listing.php?listing_id=42435882&ref=sr_gallery_12&&ga_search_query=Hope+for+Haiti&ga_search_type=handmade&ga_page=&includes[]=tags&includes[]=title
Here is the url for "By the Bay"s blog
http://bythebayneedleart.blogspot.com/
Yesterday I went to the doctor's for my...How are you doing Sherry checkup? Well after the visit I wasn't doing so well. I now have diabetes. So I was told. It runs in my family from both sides and all of these years I have dreaded the thought of getting it. Well....it is here. This morning I had to go and see a specialiest to show me how to use the meter and all of the other stuff. She told me she thought my problem was from staving all day and then just eating the one meal at night has thrown my sugars off. I know it is also from weight I have gained from taking the antidepressant medication when I went off my rocker after taking Chantix and ending up in a NUT HOUSE literally for my own protections. So now I have traded one killer...my smoking to another killer...overweight and diabetes...so I am not a happy camper today. I got a bunch of stuff I have to work though. UGH!!!! I told Mark earlier just to give me the shovel so I can start digging my own grave. I was kidding of coarse...but I am not happy. So now I have to tell my brain to eat because I am starving my body and I don't have enough insulin to take care of my evening meal.
Since my husband now works 12 hour sifts it does make things a bit harder. I use to go and walk after supper but that is so late now that it is dark outside after dinner.
I don't know...I just know that things have to change around here.
I guess this is enough typing away for now. More on another day.
Posted by Sherry aka Celtic Dream Weaver at 12:02 PM 3 comments:

Think Green...yes, Spring is coming soon....Here is a sale that is going on at Handy Hands. I thought I would share this with all who come to my blog incase you want to get in on the sale and you don't receive notices in your email about the sales that Handy Hands does.
So...buy...buy...buy...think of the pretty butterfies you can make or how about flowers...or a birdie or two.
Also note when the size 80 thread will become available in all 111 colors..that is solids and variegated.

HANDY HANDS TATTING SPRING DISCOUNT 15% OFF -SPRING Sale - 15% OFF good ONLY March 19 - March 24, 2010.COUPON Code 324 - use just the numbers in coupon field when you checking out. There is NOW 111 colors in the Lizbeth thread in sizes 10, 20 and 40. The first 11 colors on the website are the newest ones.COMMING SOON!Size 80 Lizbeth will be comming in June in ALL 111 colors.For those that pay $5.00 for the Newsletter for a 12 page printed booklet, do not forget you have coupons in the Winter issue.RULES: 1. Coupon has to be in the coupon field for discount to apply. 2. Coupon CAN NOT be combined with any other discount, just the shipping and handling if you are a newsletter subscriber. 3. This offer is only good for internet orders. 4. Discount does not apply to previous orders. 5. The discount does not apply to the newsletter or back issues of the newsletter. Coupon CAN be used more than once, tell your friends. WEBSITE - www.hhtatting.com NEWSLETTER subscriber(those that pay for it and receive it by US mail three times a year) remember to use your S & H coupon if your order is over $35.00. IF YOU have NEVER been a subscriber be sure and click on the hanky for more information as it is $5.00 a year for 3 issues. The free Shipping applies ONLY to US, PR and APO address. Be sure and include that coupon code in the field. NOTE: The coupon Expires at Midnight Eastern Time (EST)the last day of the sale listed above. NOTE: there is a 3 hours difference from California time (PST). Discount applies to retail orders only.If for some reason you have trouble, or do not wish to use the shopping cart be sure and call us, state this to us and we will accept your order over the phone, only during normal business hours. Be sure use the coupon number above. Handy Hands, Inc. Ph: 217-379-3802 M-F 9-5 Central Time.
Posted by Sherry aka Celtic Dream Weaver at 6:47 PM No comments: