Hi everybody,
Not to much to really share with you...but I did finish this bobbinlaced butterfly last weekend. I have now started making a Bedfordshire Bookmark which has thistle flowers in it. I saw this bookmark done in white shortly after I returned from a trip overseas to the British Isles and Ireland. I fell in love with this book mark...and it was the fire that burned my butt and said...Sher....you really need to learn how to make bobbinlace so you can make that. So I have learned bobbinlace and have been doing it for about 8 or 9 years now...and I have decided it is time to see if I know enough of bobbinlace techniques and see if I can make the bookmark. I am making this bookmark using black thread and a metallic black thread and using gold Goldrush for my gimp thread. This will take me quite awhile to make since I really don't have much time for making bobbinlace anymore...but I still enjoy it just the same when I can find the time. Meanwhile...here is the butterfly from Brigitte Bellon's book "Gekloppelte Fruhlingsmotive" p. 12 and 13. This is a great book. Lots of Butterflies, flowers and heart patterns. It is in German for the text...but the patterns aren't too hard to follow. 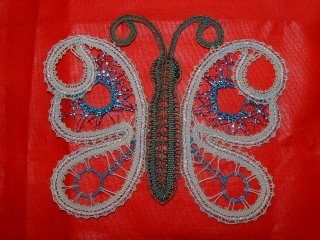 Posted by Sherry aka Celtic Dream Weaver at 9:47 AM 4 comments:

Oh and one more thing I have to share with you all. Yesterday I went to visit my girlfriend that I have know for almost 30 years. I haven't seen her in years...it seems like when I was going through a difficult time in my life I dropped my friend and almost became a hermit...I thought it safer for me to do that....
But seeing her yesterday was so great...I got an email from her today and she stated that our friendship picked up like it was just yesterday. We had so much in common and use to do alot of things together. We even thought of writing our own book once...how funny is that...over coffee. I think we actually wrote a few pages...
But she found my blog one day searching the internet...and unbeknowst to me...she has been reading it right along. One day I called her about a month ago...and that is when I found out she had been reading my blog. Some of the things we were talking about to get caught up she already knew about...and I said...how did you know that...and she told me about finding the blog. LOL
But we agreed to get together yesterday on Saturday and she told me to bring my stuff. I kept telling her during my visit that I felt I could teach her to tat and bobbinlace and that I could bring her over to the dark side...LOL
In the email I got from her today she stated...she thought bobbinlace was beyond her....but she might let me teach her how to tat. She stated she loved my tatting....so who knows....she said she might let me bring her over to the "Dark Side" LOL!!
In a couple of weeks we are going to Henrrietta where there are some craft stores together like AC Moore which I didn't know there was one in Henrrietta. Henrrietta is a subberb of Rochester, New York....and I so hate driving up there....but it will be fun to go with my friend Laurie. She also stated...Steve her husband is a good sport...but it would be more fun to go with someone who also loves craft stuff....I may be in trouble...Did I say "Craft Stores" OH NO!!!
Posted by Sherry aka Celtic Dream Weaver at 1:55 PM No comments:

Email ThisBlogThis!Share to TwitterShare to FacebookShare to Pinterest
Happy New Year EVERYBODY!!!!!!!!!!!!!!!!
Be prepared to sit for a bit on your computer for this might be a long blog entry.
First I will start off with what I got from Mark Myers aka Tatman. Here is a link to his blog and his website.http://www.tat-man.net/blog/
http://www.tat-man.net/ BTW Mark if you are reading this blog what does PTL stand for on your blog. I am clueless as usual.
I sent Mark the white 3D Christmas tree that was pictured earlier on my blog. I have made 3 of them all together. I gave another one away and I kept one. I am finding that not only does that make a pretty Christmas Ornament ...but great Tatting Play Toy. I find myself sitting every once in a while playing with the branches of the tree. If you want a Tatting Toy try making one and see if you don't do the same thing as me. I also gave him a pair of painted bobbins also already pictured on my blog and I think I threw in some chocolates too.
The other day I got my exchange from Mark. And what a NICE exchange package it was too.
He sent me a wayyyyyyyyyy COOOOOLLLLL bobbin that he painted for me. This was Mark's first attempt at trying to paint a bobbin he told me. And guess what...IT IS A DRAGON...now how cool is that I ask you...very cool I am thinking. I took a close up of the bobbin turning it so you can see all the way around it. 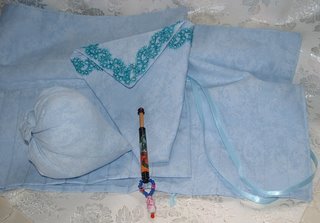 It is a beautiful bobbin and you should be able to see the painting better if you click on the picture to see a better picture of the bobbin. I feel so lucky to have a piece of Mark's artwork at last. So this is one special bobbin. I know I paint bobbins myself...but getting painted bobbins from others makes them more special to me. My friend Erin has also sent me personally hand painted bobbins. Now that I can see how well Mark paints on a bobbin it puts my attempts to do so to shame. But take a look at the funky looking spangle he put on my bobbin. How unique!!
He also sent me what else you see in the picture. A bobbin holder, a pin cushion and a Bobbinlace tidy that I can pin on my pillow to put either my tools into ( which is probably what I will do with it) or snippet of thread. The tidy has his own design "Waves Pattern " that he made out of King Tut quilting thread that he had shown on his blog I think it was last year. He also sent me some old Hancock Fabric Catalogs which to be honest I sometimes get ideas from for my painting. Thank you so very muchly Mark for my treasures.
The next topic to write about is the Peter Cua Tatting Shuttles that Handy Hands will be carring after Feburary. Some of these are actually mine and some are those I got to look at and play with for a bit. I also have bits of tatting in the pictures too....So here goes....PICTURES
In this picture here you will see the proto types in my Irish Claddagh Design that I drew out many years ago to have put on a Sterling Silver shuttles....I will still try to get that done someday...but HEY!!!!!! At least it will be on a shuttle... 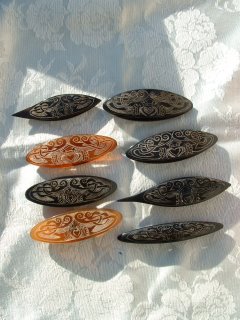 I am so honored to have my artwork on a shuttle. 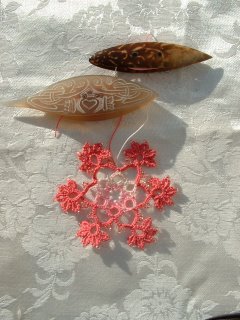 Also in this picture is the

model of the Celtic shaped coconut shuttle that Handy Hands will be carrying. 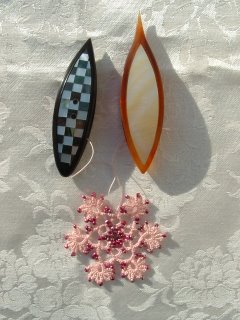 In this picture you can see the Gold MOP inlaid into a bleached horn shuttle. Also with it is a checkerboard White MOP and Tihitian Black shell inlaid into black horn. Again...these will be available in Feburary from Handy Hands. 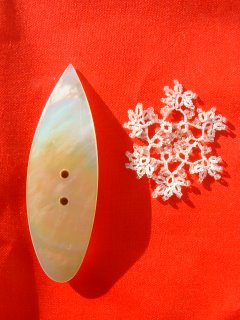 In this picture is a Gold MOP Hybrid shell shuttle. Handy Hands will be carrying this shuttle also. The snowflake in the picture is something I tatted using white metallic sewing machine thread with very tiny size 15 beads on it. 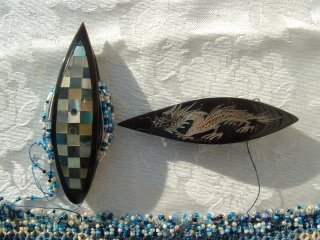 In this picture you see my etched dragon on horn which is a shuttle that Handy Hands will not be carrying but just so happens to be in the picture. What they will be carrying is the shuttle next to it. This shuttle has a short point on it and is inlaid with Gold MOP and Black Tihitian Shell. This is a very pretty shuttle....I love the color play on it...but it does distract me a bit from my tatting....OOOPS. This is my shuttle. Again it was a prototype. The one Handy Hands will be carrying will be more pointed on the butt end. I like mine just the way it is with it being a little rounded. So that is the shuttle story. Handy Hands website is :http://www.handyhandstatting.com/index.html

Now for the next topic of this post.....I have been collecting Hershey Chocolate Ornaments for more than twenty years....I have a small tree that I put up and decorate with these ornaments...note the purple garland....my daughter gave me that....PURPLE!!! LOL I think next year I will also put my tatting and bobbinlace ornaments on it too. I would do a tree with just those but....I don't want to decorate three trees. I think two is enough....but take a look at the ornaments...they all have Hershey on them somewhere.... 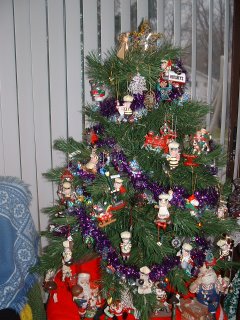 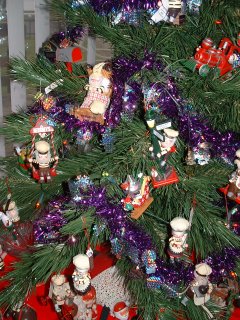 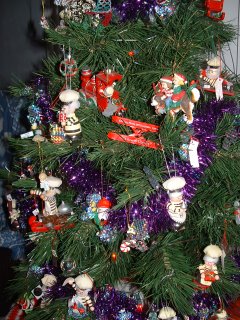 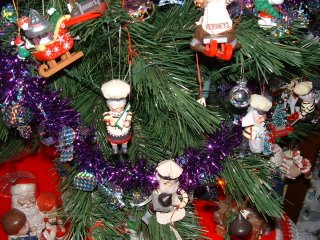 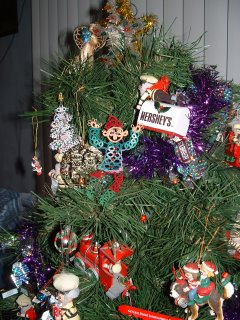 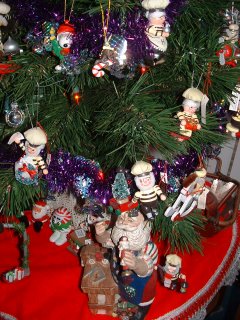 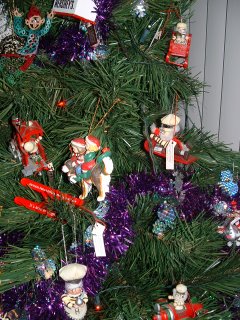 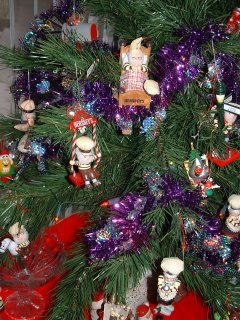 The ornaments are alot of fun to collect but I didn't get this year's though....money.....I need money...by the time I finally sent my money in they were out of this years....OH WELL!!

In the next subject is Christmas stockings. I have cross stitched Christmas Stockings over the years for all of my children and my oldest grandson. Here are the pictures of those 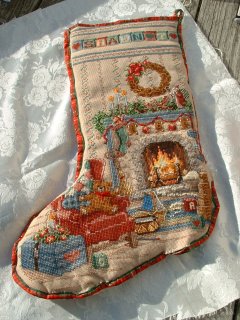 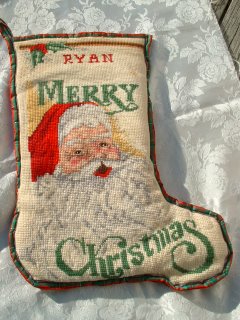 Ryan's stocking even survived having spaghetti dumped all over it....what fun that was to wash out....UGH...on all that white thread and background. 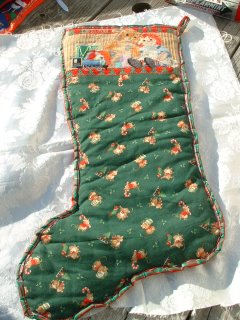 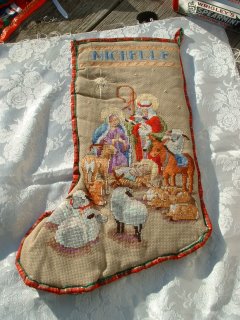 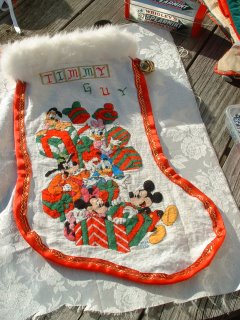 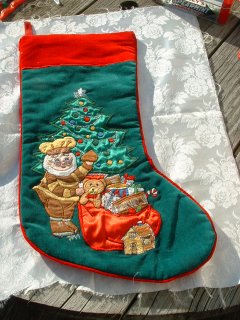 Here is my stocking....nothing special about it...I ordered it from Hershey collectibles along time ago. I don't think you can get it anymore....maybe I should add a bobbinlace or tatted edging to the top of it...what do you think.

And the last stocking is the one I have started for my youngest grandchild Peyton. He will be an year old on January 9th. I don't know where time went....but I want it back...I plan on putting tatted snowflakes made with tiny thread and tiny beads on this stocking and I am also planning on tatting a bear that I saw along time ago on it....but will be one of my projects to do and finish in the year of 2007 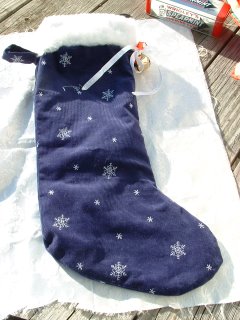 I just can't make myself do anymore cross stitch....I have done tons of it over the years... 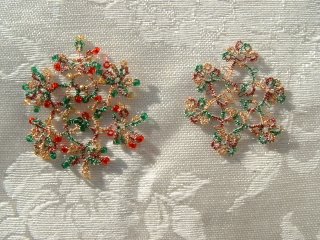 Now that I have practically written a book I will say...tat and lace your little hearts out!!!

Posted by Sherry aka Celtic Dream Weaver at 1:55 PM No comments: