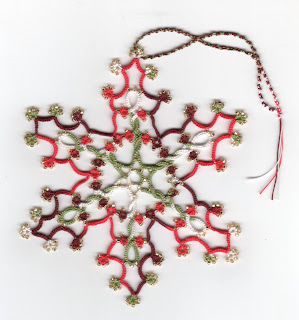 First of all I am showing a tatted snowflake. This is the Celtic Snowflake designed by Ruth Perry. It came about while making a tatted snowflake for an exchange on the Tattinggoddess Tatting List. This is one of the snowflakes I have made. I just can't show everything you know. I am even in the process of making another one in a thread sample of some new colorways that Handy Hands will be coming out with soon. Handy Hands will also be carring size 40 in all the different colors including some newer ones. That should happen sometime before the Summer is over. This snowflake was made with size 20 Lizbeth thread in color number 144 & 147 with gold beads. I think the snowflake turned out "Purdy."
The other bit of news has been unsetting to me. My daughter Chrystal ( who is my oldest daughter) found out last week she is a diabetic. She has been complaining for awhile of not feeling good, being tired and so on. She had some blood work done a couple of months ago that was showing then she had a problem but she didn't want to follow up with the other test that she needed. Last week she did...her blood sugars was over 400. That glucose reading is very very high. She has to have insulin and monitor her blood sugars now to try and get the sugar under control. I don't know what all the results of her blood work were but I have a feeling she had liver blood work done too and they must have also been off. She had to have a Ultrasound on her liver which showed she does have a fatty liver which they feel is the results of having such high uncontroled glucose level in the blood. When there is alot of sugar in the blood insulin comes in and takes the glucose out of the blood and sends it packing to the liver to be stored as glycogen for future use if needed. If it isn't needed and it keeps accommulating in the liver the glycogen eventually becomes fat. Tomorrow Chrystal has to see the dietitian again and she also has to have a Cat Scan of her liver or pancreas. Chrystal wasn't sure for they saw something on the ultrasound and want to have a better look at it to determine what they were looking at.
Like I said this is upsetting to me. I have always been scared of getting diabetes myself since it is on both sides of my family, but so far I haven't gotten it. Usually when the scale starts to move up I start dieting like I am doing right now. ( I got weight gain right now the doctor feels was from the antidepression medication I was on but am not taking now) and it is a really battle for me this time because it is so much weight and it came so fast. My doctor says I should loose it again since I am no longer taking the antidepression medication...well that may be...but it isn't going fast enough to suit me so I am dieting like crazy to get the weight back off. Anyhow...I feel I might have passed the diabetes on to her. Diabetes is hiereditary so I don't know. So I will be thinking of her tomorrow and hope all is okay from the tests.

Sorry to dump this on my blog here...but I hate diabetes for I have seen what it does to people...I didn't want it...and I certainly don't want my children to end up with it.
Now I will show you something that is upbeat and happy ...Some of you may have heard that I won in a give away that Gina Brummet from the Tatting Goddess blog. I won this beautiful lady which I have named Anastaisa. She is really pretty with her purple dress and with the purple tatted trim on that dress. I love the way her hair is ontop of her head and I love the cute paint job that Gina did on her face.
Well I have to tell you my elf friend from Ireland Fergus Og saw her his eyebrows twitch up down as he was eye balling the beauty and the next thing you know...he whisked her right off her dainty knotted hemped feet and started dancing to some of my old records with her. Yes, someday those records will be antiques. Anyhow...you should have seen then twilling and dipping and dancing away...I think I might have even seen some hip gyro going on...LOL. 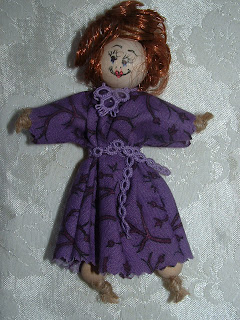 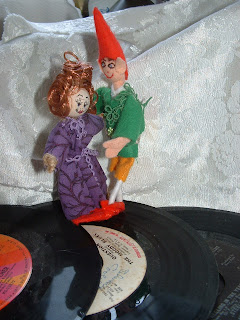 Posted by Sherry aka Celtic Dream Weaver at 10:01 PM 6 comments: 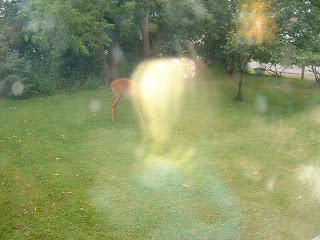 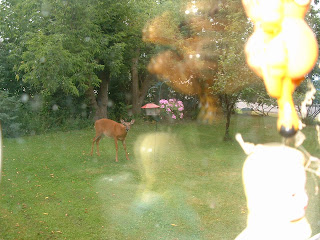 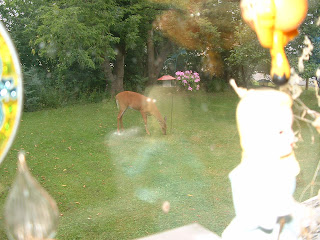 Take a look at what my camera caught through the kitchen window this morning. Nope, it was not a dog...but doe a deer a female deer....hmm along now...The blurry things you see in the picture is some of my sun catchers which I have all over my kitchen window. Enjoy the pictures...I sure did...I know the deer are around here for I see them all the time along our road...but don't usally get pictures of them.
Posted by Sherry aka Celtic Dream Weaver at 10:35 AM 3 comments: 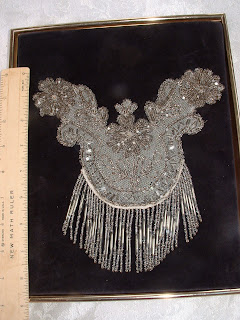 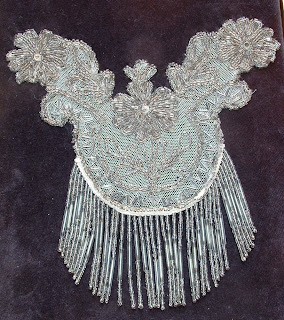 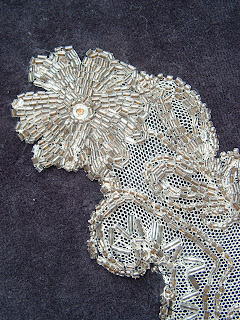 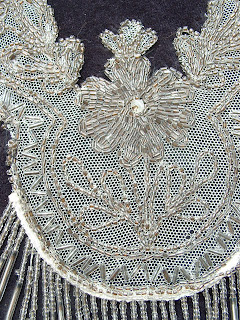 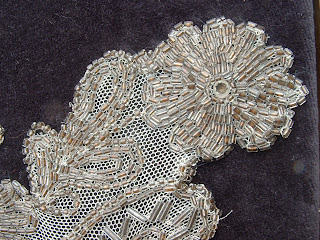 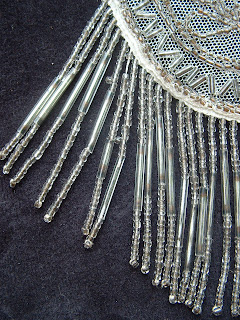 I have uploaded a bunch of pictures of this piece of beaded lace that my husband found today while out and about with his use to be work buddies ( my husband no longer has a job...) at a junk sale. On of the pictures I took with an ruler so you can scale the size of the lace.This Beaded lace is sewen onto net. I am wondering if it might have been on the front of a dress...maybe a wedding dress. The beads I have a feeling were all silver lined glass for I think the inside of the beads are looking a bit tarnished. The design is so pretty and I am wondering how they went about doing this. This Beadwork looks pretty old looking. And the last person who had it sewed it onto velvet looking material. What do you all think about it? Please leave me your response here or on the arachne list. I thank you in advance for coming to my blog to look at this piece of what I am calling "Beaded Art."
Posted by Sherry aka Celtic Dream Weaver at 2:35 PM 5 comments: 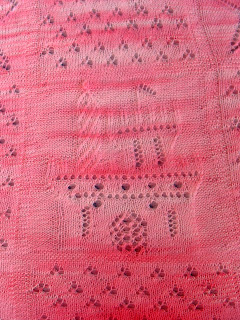 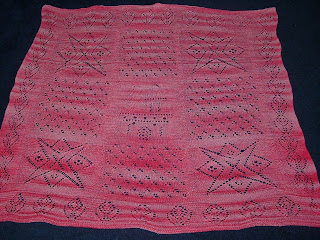 Hi everybody. Just a couple pictures to show you. One is two pictures of the blanket I knitted for my Movie Star Kiara ( my granddaughter) I am showing two pictures so you can see the whole blanket and then another picture which I hope shows you the castle that is in the middle of the blanket. You can also see eyelet lace,stars and the flowers I knitted around the boarder. It took me awhile to get this knitted because the stars are patterned on the front and back of the blanket. I gave it to Kiara a couple weeks ago.
Here is a recent picture of the "Movie Star". It is hard to believe she will be five months old pretty soon. She is such a beauty. 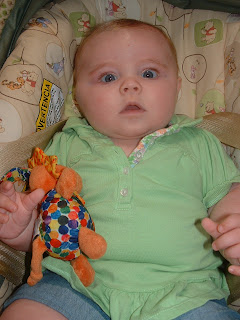 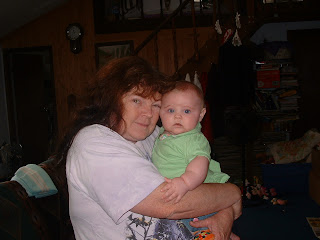 Here is a picture too of my other two grandchildren. Timothy and Peyton. Peyton is now 3 1/2 years old. He is just about all potty trained now. Whew...thank the Lord for that. Timothy is 12 years old. I see Peyton and Timothy just about everyday since I baby sit them while Chrystal and Gary work. The "Movie Star" I usually see at least once or more a week. I really enjoy my grandchildren. 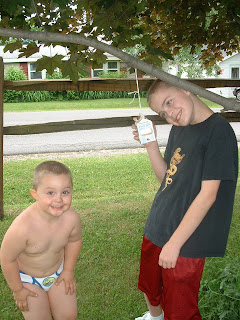 Today I worked a bit on my thistle book mark in Bedfordshire bobbinlace and either later on tonight or tomorrow I will be back to working on my Summer Mystery Shawl. Clue 4 came out today. The shawl is purple using Merino Lace yarn.
Posted by Sherry aka Celtic Dream Weaver at 6:44 PM 6 comments:

Hi, I am not going to write about lace today. Instead I will write about what I did this afternoon.
I spent the afternoon in front of my computer watching the streamline memorial for Michael Jackson from CNN and Facebook.
I would like to say that the flower I hate the most is Galds. They remind me of unhappy times ...mainly when a love one had passed away. They make me sad. I am also the type of person that cries at funerals. I think I would do that even if I didn't know the person....so....
This afternoon I sat here in front of my computer balling my eyes out and using the hanky tissues that my friend Erin Halloway gave me. The hankies are cute with hat boxes piled one on top of another with this puff balled high heel shoe ontop. The puff ball is pink...so like Erin huh??
Anyhow...I was sadden greatly.
I decided to watch it for when I was a teen ager this is when the Jackson 5 were putting out music and hitting the charts. I can even remember where I was when I heard some of their songs. I have some of the old 45s and albums still. They and especially MIchael have been a part of my life ever since I went from watching TV person to I love music person. That means I am a music lover. I have always admired Michael's dancing and I also love MIchael Flatley's dancing. MIchael Flatley's dancing is noted from the show "Riverdance", "Feet of Flames" and "Lord of the Dance". Both dancers have some pretty fancy footwork.
I will always remember the first time I saw Michael Jackson's MOON WALK dance steps. I was amazed and I remember trying to figure out how he did that. I never could figure that out...but I can do Irish dancing.
Yes, I dance in my house...and yes....I did alot more dancing years ago and I use to do it in my kitchen in the morning and at night after getting home from work at midnight or thereabouts. Dancing was my exercising and yes...I lost weight doing that. As a matter of fact I have gained some weight and my doctor tells me it is from my antidepression medication I was taking . I don't take it anymore and now I have this weight to get off. So my son who remembers me doing this all the time...keeps telling me I should start doing that again. Maybe I will...right now I have been doing alot of walking and playing basket ball in the driveway. And have removed the pleasure of my life and that is enjoying food. Ice cream is my downfall.
Anythow...I did alot of crying this afternoon. I lost it when they were showing pictures of the different MIchaels over the years, I lost it when I was hearing his his voice the different espects of his feelings, and I really lost it when his daughter Paris said how much she loved her Daddy and how good he was.
Anyhow...I just wanted to share my thoughts. I have been a fan of Michaels over the years. I loved his music and I loved his dancing. He was a true gift of artistry. I really feel he did alot to make the different races come closer together. He crossed alot of boundaries.
Maybe tomorrow I will share lace or knitting or something. That will be only IF I find my computer first...LOL

Posted by Sherry aka Celtic Dream Weaver at 9:19 PM 2 comments: