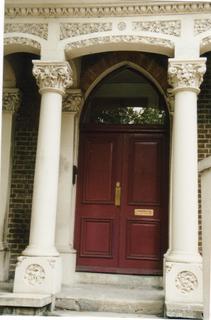 Another hot day.....but....
I am loving it. At the moment I am all hot and yecky...but not for long. I am going to go down to the lake and literally jump right in.....and cool off.
I thought I would share some different kind of pictures with you today. I was in the UK and Ireland about 6 years ago. It was a dream of my life when I went over there. I wanted to go to the place my ancestors came from. I was over there for a month. We went on a tour that started in London, then up the right side of the isle to Scotland eventually, across the locks (lakes) and then down into Wales and then we went on a huge ferry. I didn't realize the ferries were so big. There were restaruants, and there was even a band playing, a theater, stores...but where I was most of the time was to the back of the ferry watching and waiting for Ireland to come into view. Which it did.
Now take a look at all the curving that is on these colums and the arches. I took alot of pictures of different curvings that were on the buildings, castles and everywhere. My mouth continously dropped open at the sheer beauty of the buildings over there....don't see much like this in New York. 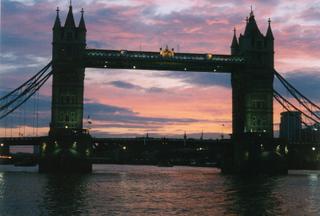 Now take a look at that sunset. Isn't that just beautiful??? Sigh...Anyhow...this was June 6th. I remember the weather that night was beautiful. We went on a cruise up the Thames River and under Tower Bridge. It isn't a really good picture of the bridge but it is of the sunset. I have other pictures that I took of tower bridge...but you don't see the colors of the sunset so well in those pictures. 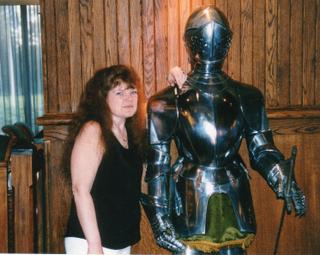 Now here is my kind of guy. My Knight in

Shining Armor. Here is another sigh....well...it is
close as I am ever going to get to one. Too bad I
couldn't take him home with me. He was standing
in the hotel lobby of one of the hotels were were
staying in.
I have tons of pictures that I took over there. I came home with over 15 rolls of film. Believe me when I say....it cost me a small fortune to get them all developed...but it was one of the first things I did after I got home from my trip after I went to visit my mother and made sure she was okay. She was in the hospital just before I left to go overseas. But things at that time worked out just fine.
Posted by Sherry aka Celtic Dream Weaver at 7:22 PM