I performed a marriage over the weekend. I made this Christmas ornament that you see here making it in tatting along with bobbinlace. It was an experiment and I was just playing around. 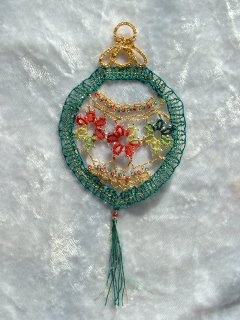 The strike is still going on. Nothing else I want to mention about that.
I went to visit my brother and Jill yesterday. They are moving back to Florida later on this month. But while I was there I watched some football with my brother and watched my team lose again. I will just say their colors are green/black and white....and they should be flying the friendly skies.....LOL They were really behind but if they could have just gotten that one touch down right at the end there...they would have won. I must say I was on the edge of my seat...with my hands over my eyes each time the ball was snapped and still they could get inside for a touch down...so close they were to winning. Bet you guys didn't know I like to watch football. Something I don't get to see very much anymore.
Posted by Sherry aka Celtic Dream Weaver at 1:20 PM