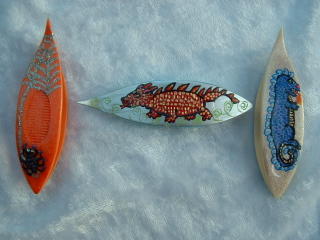 OH MY,OH MY....I have posted to my blog two days in a row....LOL!! Don't worry...it won't become a habit.
Anyhow....I have spent the past couple of days painting tatting shuttles. And other things...that I don't want to discuss...LOL So I am going to put a picture of the three shuttles that I have just listed on ebay this evening. The dragons look kinda funny don't they. You should have seen my pencil drawing of the dragon I did before I started working on Dragonique. I am no artist. But anyhow...at least what I am doing is a positive thing to do...instead of putting Kleenex out of business for I got all their kleenexes all wet.
I aslo wrote the list tonight. I just wanted people to know that the shuttles are on ebay. I want tatters to see them and know they are there. I am just doing what I can at the moment to try and well...do something besides nothing. Here are the url for the ebay listings:
http://cgi.ebay.com/HAND-PAINTED-TATTING-SHUTTLE_W0QQitemZ8224126804QQcategoryZ19158QQssPageNameZWDVWQQrdZ1QQcmdZViewItem

http://cgi.ebay.com/HAND-PAINTED-TATTING-SHUTTLE_W0QQitemZ8224129970QQcategoryZ19158QQssPageNameZWDVWQQrdZ1QQcmdZViewItem
I also mentioned on the list about this Scooby Doo Halloween Flag I saw at Wally World the other day in their Halloween stuff. You know with all the ghost and mysteries that Scooby and the Gang has solved over the years....he is perfect for a Halloween mascot. But I did want the Flag. Some of you don't know that Scooby Doo is my hero...he makes me laugh. Laughter is something I like doing. I do collect Scooby Doo things. I have a notebook with a zipper that has Scooby Doo on it. I call it my Scooby Doo Tatting Fun Book. That is where I put alot of my tatted treasures I have received from people and some tatting and lace I have done. Nobody has ever given me lace that they have made....so all the lace in my book is my own I have done over the years. I have to say I tat more that I bobbinlace. I don't know why really. I love doing both. Maybe it is because with tatting I feel comfortable enough with it that I feel like taking my wings and fly and try to design something in tatting...whereas in lace....I am still trying to fly from one branch to another sorta speak. Back to Scooby Doo here....I have Scooby toys that I think have come from mostly Burger King over the years and flee markets I have been to. I also have huge Scooby Doo house slippers. I wear them alot in the wintertime...but I have to be careful in walking in them....they are a bit awkward to walk around in. I also have Scooby Doo picture Frames. One of them sits by my computer right here...it has a picture of my best friend in the frame, my doggie Angel Eyes.
Speaking of Angel Eyes...I will share a story with you...it is kinda funny. Angel Eyes was a pure blooded Alaskan Malamute so she had her papers. We registered her....for we were thinking of breeding her...but that never happened. Anyhow...I was trying to think of a name...and then I thought of one of my favorite movies "The Good, the Bad, and the Ugly" with Client Eastwood. So I decided I would name my dog after the character that Client played which I thought was Angel Eyes. I think I must have had a senior moment for I have seen that movie many times. After we named our little puppy for she was little once....we saw the movie again. As we were watching the movie...it came to me...right between the brain cells...Oh....MY GOD....I named my puppy after one of the bad guys who I think was played by VanCleef (not sure of the spelling) ( I know it is wrong...but the brain cells are starting to go to sleep) Client's character was Blondie. Now truth to be told...I really don't think Blondie would have fit my dog. She wasn't blonde but had the wolf coloring instead. She was black, gray and white...with yellow eyes. She was always looking for loving and wanted to be with people though some people were intimadated by her...she was big and she would love you to bits....Yup...she was my doggie.
So I guess it is time for me to stick my nose in my book that I have been reading ...which I will be reading for along time...the book has almost a 1000 pages in it....
Posted by Sherry aka Celtic Dream Weaver at 10:58 PM

Part of Bryan Boulevard to temporarily close
A section of Bryan Boulevard will be closed so cews can install girders for bridges on the Western Urban Loop.
Find out how to buy and sell anything, like things related to music on interest free credit and pay back whenever you want! Exchange FREE ads on any topic, like music!