Hiya in Around the World and to whomever is reading this post.
I had a great time on my vacation going to Tennesee to Erin Holloway's house and spending time with Suzie Q...oh I guess she likes to be called "Purple" these days and Raymond. I had such a good time and I thank Erin my friend so much.
You know, Erin really is a friend of mine even though we live so far away. She is just a phone call away and we so enjoy talking to each other about this and that. I thank the Lord for putting Erin on this planet.
Anyhow, as I said, I had lots of fun last week. I can't believe how time flys....I have lots to share of my trip to Tennesee and also the fun I had at Palmetto's Tatting Event...but first I have just one tale to tell you all. MY VERY HAPPY NEWS!! I found this out while I was at Erin's house...away from home.
Here is the tale. My oldest daughter Chrystal has been saying over the years since having Peyton her last child four years ago that she doesn't want any more children. She kinda had a tough time with Peyton and gained alot of weight. She did go into labor on the day of her schedule C section. Peyton, the medical team knew was going to be a big baby. He weighed almost eleven pounds. Anyhow...
Sunday evening or should I say at 1A.M. on Monday morning I was in the computer room at Erin's checking my email about my flight and paying for my one checked suitcase. While I was there in my email box there was an email from my daughter Chrystal. In the subject line was..."Hello Grandma" and I did notice the attachment. I opened up the email and this is what it said.

"Hi grandma, we are not sure if it is a boy or a girl yet. I am at 13 week. my due date is march 3. It was the march 11 but when i went for my ultra sound said I was 13 weeks not 11 weeks. we think it is going to be another big baby. "
I just about fell off the computer chair I was so surprised. I thought the email was about my two grandsons with a picture of them since I was away for a week and maybe Chrystal thought I was missing the boys ( I babysit the boys while they work everyday).
So...I went running down the stairs...saying....Erin...ERin...you will not believe what I just found out....I said...Chrystal is having another baby. ...that means I am going to be a Grandma again. I am really happy for them. The funny thing is...she is three months already. Some things were going on and Chrystal had test that came back saying she was pregnant and that could explain some of the problems she was having. She wasn't expecting at all to be pregnant...but you know pictures don't lie and now she is beaming with that pregnancy glow. She has to be careful and because of her diabetes which puts her at risk...she had to see the OB doctor every week.
Here is a couple pictures that were in my email box of the next little one to be.Chrystal says she wants another boy but I think the little one is going to be a girl. She was sick with the boys but not with this one...just a bit of nausea is all. 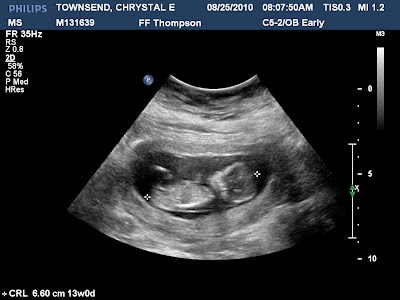 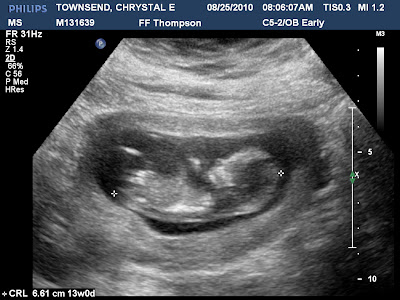 It was pretty cool having Erin share this special moment with me. This news was really the icing on the cake for a great week.
More about the trip in another post. CYA
Posted by Sherry aka Celtic Dream Weaver at 9:25 PM

What a great surprise for you all! Congrats Grandma, and congrats to the parents as well! (looks like a girl to me)