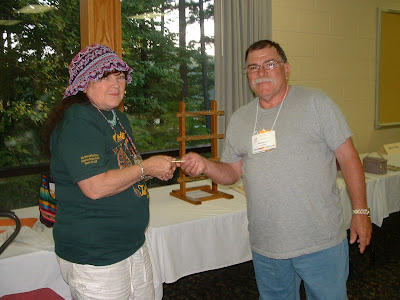 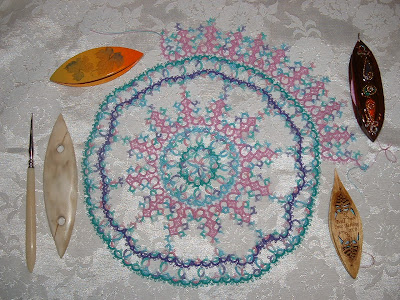 Hiya Everybody
It is blog time. First of all...Erin...here is my "Noel" doily designed by Ben Fikkert and is on pages 20 and 21 in his "Floriade" book. I am doing it in size 80 Lisbeth thread in Summer fun and in solid colors that I am pulling from the variegate. This doily has plans which I will tell about later on.
You will also see some other things in the picture. Showing are some shuttles. One is the commerative shuttle from the Hintons. The other orange with the leaves on it is the commerative shuttle from AK Georgia Seitz. You will also note the flat really nice deer bone shuttle. This shuttle was handmade by Richard Seitz just for me which he gave to me. I have a staged picture of Richard giving me the shuttle. He promised to give it back to me. It is really nice and quite the treasure.
I came home from Palmetto Tat DAys with some treasures. First of all is this neato purple purse from Suzie Q or Purple Sue or Sue Hanson. Inside the purse was some fine bobbinlace thread ( Which NO MARK...I am not going to try and tat with it) and some other thread that I can use as a gimp thread in my bobbinlace or....tat. 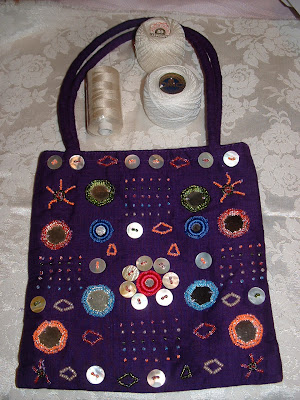 I also came home with some other treasures made by some special people. In this picture you can see a beautiful necklace that my friend Erin Holloway made for me. Erin actually made two different necklaces. I let Suzie Q pick first and I got this one which I would have picked myself.
Also you can see in the picture a butterfly that I got from Riet, a bird of paradise I got from Martha , a angel from Marie Smith, and a beautiful Pumpkin TeaPot I got from Martha from our exchange that we did. I also got a cute and pretty tatted hat from Stephanie Wilson which I am letting my stuff Scooby Doo model from me. 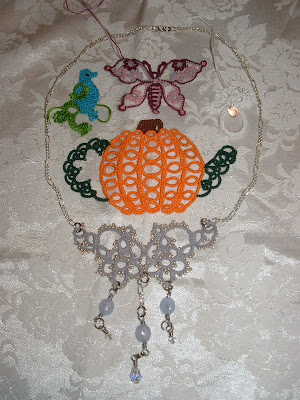 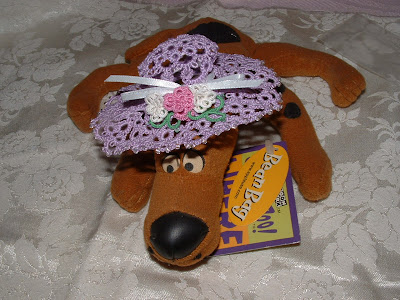 Here are two tatted items I made during vacation. One is the butterfly from Riet's class that I took and managed to finish. I love this butterfly pattern! It was a very well thought out pattern. Also in the picture is my "Doodle the Poodle" from Erin Holloway's class. I didn't actually take the class. I did this at Erin's table before we went to Palmettos. I also love this pattern. The poodle is so cute and I did mine in black since years ago I had a poodle and her name was Chippie which was short for Chocolate Chip which was her real name. She was actually a cross between a standard poodle and a minature. She dies of Parvoe Disease. It is kinda funny...I guess I don't have the type of voice that people or dogs command to...She was kept in the house as a house doggie...but every once in awhile she would get loose and I would end up chasing her all over the place including trying to get her to come to me with brides of real meat...but she didn't have any of that...but my husband would call her and she would come...go figure. 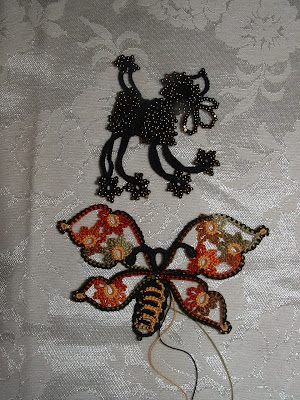 I also got this beautiful bag from Erin...which fits in perfectly with next year's theme from Palmetto Tat Day which is..."Tatting in a Winter Wonderland". I think this is a cool theme for next year.I also came home with some beads from out jaunt to Lily's Bead Store in West Knoxville. The dragon on the bag was also given to me from Arlene Medder. I do think that sometime I will make a tatted necklace for it that was taught by Karey Solomon one year at Palmettos. I don't recall the name of the pattern but it was for the early bird class. I didn't attend it...probably too early for me.There is a strand of expensive Aquamarie Faceted Gem stones that I plan on making a necklace out of. Aquamarine is my birthstone and it was such a good buy I couldn't refuse. Since there isn't a bead store near me...I just had to get them. The beads were the most expensive thing I got. 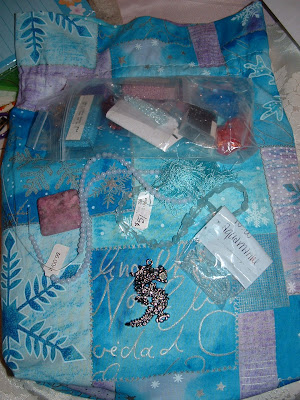 I flew to Knoxville, Tn. and stayed with Erin on Sunday August 22nd and flew back home on August 30th. Sue Hanson (Purple Sue, Suzie Q) was already at Erin's house. She flew in on Friday. Anyhoo...I got to see what Suzie Q bought for the silent auction before it was put in the auction...and I said ...I am going to try and get that. It was this piece of linen (real Linen) with the flowers of the UK stamped on it. Since I have such fond memories of my trip to the UK and Ireland...I just had to have it...and I did get it along with the pretty necklace that was made by Vicki Clarke of Canada and was donated for the silent auction. I happen to also like Amber so that is why I tried to also in the necklace in the silent auction which I did win. I really like the simplicity of the design. 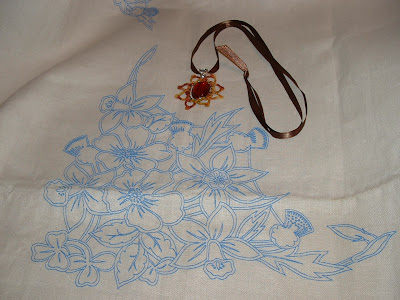 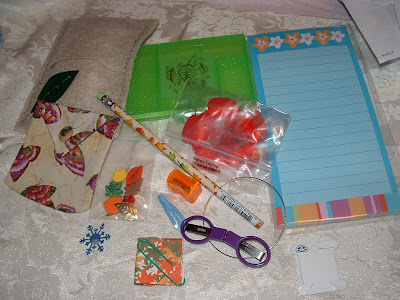 And I will leave you this evening with one more picture. I've got more to share with you all...but blogging is time consuming...for it takes a bit to upload pictures and then you have to mess around because your text and pictures end up getting separated by big gaps of nothiningness. So I will post again really soon and continue on with the sharing. But here is Erin, Suzie Q and me at Erin's table of creativity.Don't the three of us look like we were having a grand time?? What fun!!! 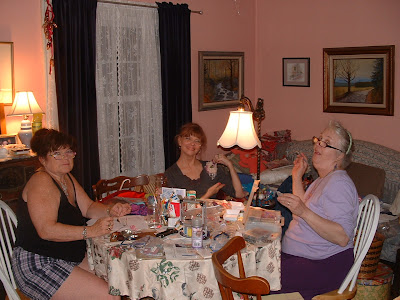 Posted by Sherry aka Celtic Dream Weaver at 10:49 PM

WOW you have a great lot of things from your holiday and the workshop Palmettos? looks like you were having fun with Erin and Suzy Q?

I would die for a tatted Poodle as we have had Poodles for years and I have been looking for a pattern like yours.....we have 2 right now Mindy and Jaycee
Love and Hugs
Happy Tatting
Joy in OZ

Lots of good treasures and fun times!!!! Love the last picture of the "Three Ladies of Leisure" :)

Oh, I'm jealous! You've had time to go through stuff and pictures and everything! My things are still all over the house and I can't find my head much less anything else.

The doily is a beauty! I posted my plain-jane version on my blog so you can see it. Wish you and Suzy Q were still here! We'd be laughing for sure!