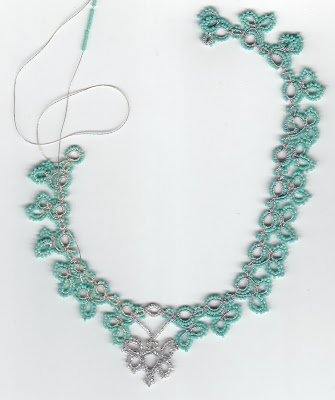 I am back from being at Hector Tatting Event today. I am not going tomorrow. I had to borrow my daughter's car to go today. It was great seeing everybody again and being around people with like minds. But all of you tatters weren't there and that deserves a big whaaaa!!!
I did spend some money...but it was money that Chrystal my daughter gave to me to spend. I won one raffle...but not what I wanted the most but hey...I won. I bought more beads...do I need them...Of coarse...LOL. I also bought two shades of pink Olympic thread..do I need those...the answer again is Of coarse...LOL...you get the picture?? I did have a good day!! I also got to meet Sue Fuller, the designer of "Heart's Desire" tatting pattern. I also LOVED her angel pattern that she taught today. I wasn't in her class. She was very nice and I believe she came from Colorado. I bought another Nina kit but I didn't take any classes for I was suppose to help the Tat and Chat group which was suppose to be beginner tatters. The only beginner tatter was the one I taught tatting to here in Canandaigua...now isn't that funny??
Of coarse they had all kinds of food there like they always do...but hey I can't have all that great food..this deserves another whaaaa...there was even a hugh chocolate bunny...but I was a good girl and didn't even break a piece off. I know I can't have chocolate...this deserves another whaaaa...why me??? Chocolate...chocolate....I was going to leave my meter home but didn't...I am now thinking I should have left it behind and ate the WHOLE chocolate bunny. The WHOLE thing.....
The other thing is last year I took Nina's class for a necklace which I worked on off, and on this year. The closer to Hector the more furiuos I was to get it done. I wanted to wear it today. Welllll... guess what happened....??? I decided to make my necklace longer so the design would go more around my neck...and I ran out of the thread that came in the kit. Well....I thought, Nina always used silver DMC thread so I bought a spool of silver so I could continue the necklace. As I was working along humming merrily...I was starting to think...hmmm why is this side so much firmer and crisper than the other side. I was thinking I must have change my tension or something. Imagine my dismay when yesterday I really ...really looked at my necklace and noticed that the silver coloring didn't match....why was that???? I was using two different kinds of silver thread...so I have to take all my necklace apart to get the beads back and start the necklace all over again. I showed the necklace to a couple people today and they said...it was really okay and they said they would take it if I wanted to give it away. To me, the necklace is not okay...to look at it would keep bugging me for I know it doesn't match ...so I will be clipping away at it. Whaaaaa again!!! Loudly. Take a look at my picture...I even called my picture that I just scanned Nina's Goofed Up Necklace. Whaaaa!! As you can tell...the necklace is not blocked.
I saw my friend Connie Angeline and she had her elf friend with her...dummy me left my Fergus Og home. Darn...and now he isn't talking to me. Well Fergus Og likes to hang around on the top of my computer screen and watch me type when I am on the computer like now. Since I had to leave so early this morning I didn't even look at my computer...well ...you know that old saying " Out of sight, Out of mind...so he didn't get to go and play with Connie's little elf friend. Fergus Og is now giving me the cool treatment for leaving him behind.
I do have pictures...but I haven't gotten around to download them yet...and I am tired. So this is all for now.....It was a GREAT day!!!
Posted by Sherry aka Celtic Dream Weaver at 10:17 PM

Oh, what a beautiful piece! I had to enlarge the photo to see that all the green was beading--I didn't know that one could tat with beads...

You are a very talented lady!

WOW...look at all those beads! Where's the tatting? {big sheepish grin} Still looks great even with the slight, ever-so-slight-you-can't-see-the-difference silver thread.

Glad you had a great time. A big WHAAAA for me too ;)