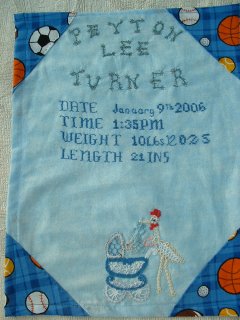 This probably going to be the last post that I will do until after the Hector event is over. Yesterday since I had my sewing machine out sewing ....I thought I would finish Peyton's birth announcement. So here is a picture of it. It is now in a frame. I took the picture without the frame so the glass would reflex and distort the picture. The letters for his name are tatted and the pattern for those is out of a Japanese tatting book that I have. The particulars were cross stitched and the stork tatted...Jane's Pattern and the baby buggy pattern came from an old Anna magazine that I have.
I am going to be really busy for the next few days...and won't have much time to be on the computer.
Hope to see some of you at Hector, NY this coming weekend.
Posted by Sherry aka Celtic Dream Weaver at 8:42 AM