Ming Dynasty is my last attempt to design a dragon. I think I am burned out in trying to make them. Besides....I have other things I want to work on. Of course this is another dragon that I am not going to be able to get another pattern out of...my mind just doesn't work in simple where I can come up with a design that can be done over a weekend for instance. But at least here is a picture for you. I guess I am just not a designer. :(( 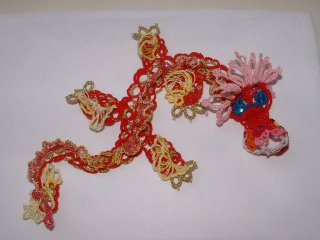 My husband will be returning back to work tomorrow. That is good news though...nothing has been settled as far as the disagreements between the Union and the company. That still stands in limbo. The company will be in the labor federal courts on appeal on charges the company already lost on.
My daughter will be returning back to work on Tuesday so that means I will have my hands full watching my new grandson Peyton. So...I will be busy.
Today I might work on my hat that I started last year from a very old hat pattern that I have had for years. I have made changes to the pattern. I always seem to do that. Originally I started the hat for the Palmetto Hat competition...but since I am not going this year there really isn't a hurry to get it finished except to get it done. I have been making the hat out of dyed purple thread that I had. I was going to make 3D flowers to go around the band but have decided not to do that. It is going to be just a plain Jane nothing exciting hat.
I also have this doily I want to finish....but no hurry there either except I want to get it off my list of things I want to get finished.
Now my tablecloth....that is another matter....that needs to get done...hopefully in my lifetime.
Anyhow....I hope all is well in LacingLand.
Posted by Sherry aka Celtic Dream Weaver at 10:51 AM

What do you mean you're not a designer? You definitely ARE a designer. Just need to get it on paper, that's all. I will be calling you after while. (She says that with "the look" while tapping her foot....)

I can't wait to see these up close and personal...

Glad to hear that your hubby is back at work! I'm taking your class in Hector...can hardly wait to meet you and get started on the "baby dragon". See ya there!
Linda :O)

Sherry, the dragons are wonderful!!!
You are an extreme designer, they are not just a design, they are beautiful art.
hugs
Gail

this is absolutely gorgeous ... wish I could design something like it!!! Keep trying xx