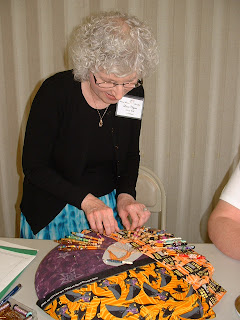 I was very lucky to be able to take a Milanese Bobbinlace class taught by Louise Colgan. My children pitched in a made it possible to go to Amherst which is a suburb of Buffalo, New York. Amherst, New YOrk is a little more that two hours from me. It is mostly thruway driving. I was nervous about driving up there since I have done it in years. The last time I was there was for a guild meeting and Pat Pike did a mini class on making Romanian Point lace. The project was an Easter Egg. I am always fearful of driving somewhere that I am not familar with I also had my daughter's car. Since the drive one way is so far away I spent the night in a hotel.

Saturday evening we went to Sean Patrick's Restaurant I think it was called. I had salmon on a bed of greens. When my plate came my eyes got very wide for there was enough food for a few people on my plate...and here I was not able to get a doggie bag of food for lunch the next day as I would have if I was here in my hometown. I also had some Potatoe Soup which was very good. I mean really good. The other surprise was I could have sworn I was waited on by Sandra Bullock ...of coarse it wasn't her and I should have gotten her picture...I told her she looked like Sandra Bullock and she told me I was the third person that day that told her that.Kinda funny huh??

The only damper to the weekend was the fact ...I thought I left my glasses at the restaurant. When I got to the hotel to register...I couldn't find my glasses anywhere. I called Joan Sulkei for help and I called the restaurant...though they couldn't find my glasses they did find some cards under the table that belonged to some of the other diners at our table. ....but here now is the funny part of this story...while going by Chrystal's car to look in the car again for the 10th time to find my glasses I just happened to look at the spoiler on the back of the car...and would you believe there was my glasses. I couldn't believe my eyes when I saw them. I think my hotel was about 10 miles from the restaurant and this was going on expressways...with swerving and blowing on my car and the glasses didn't dislodge and fall off the car. Anyhow...I was so glad to have my glasses.

Now back to the class. I had chose to make the Milanese Seahorse...one of Lousie's designs. This evening I am on the tip of the tail. Tomorrow I will lay bobbins in to start the belly of the seahorse. I saw many of Louise's finished designs with my own eyes including the Milanese Poppy that is shown in this month's "Piecework Magazine" ( which I have already ordered. It is the only one I get now..the May Lace issue)...
I found Louise to be a really good teacher. She really knows her stuff...is very relaxed, charming and knows each part of her designs I think by heart. I found I learned alot from her. She does have an easy way of talking to her and she does have a sense of humor.
I also had two very good lunches that was part of the registration money. I really felt this event was a good deal price wise.

There were many vendors too...Holly and Gerry, Kirschners, Karey, and someone with period lace were selling lots of tempting stuff.

The speaker we had also gave a lecture on the history of lace in woman's clothes. She also had some with her that she showed. I am going to put those pictures up here on my blog for you all to see at a later date...for now I am going to show you the pictures from the restaurant, and a couple pictures of Louise Colgan.

There was also a very nice collection of lace shoes or shoes with lace. I bet Ms. Erin Holloway would love to see some funky and cool looking shoes. There was also a box where you could pick out your favorite lace shoes. It was a contest. I will also show pictures of those in another post.

Lastly I would like to thank the Ladies of Amherst Lace Guild for the event. I was so happy to be able to take Louise's class. 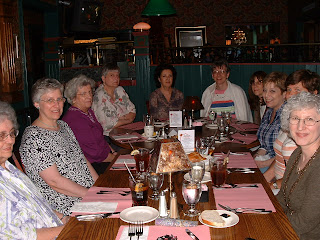 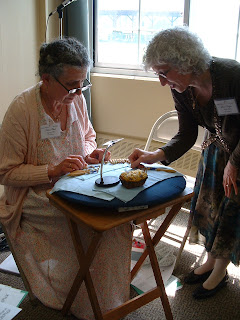 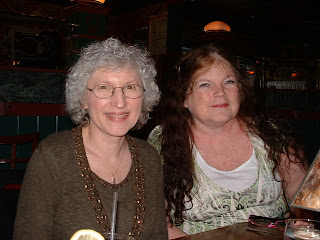 The one person you see in all of these pictures is Louise Colgan. 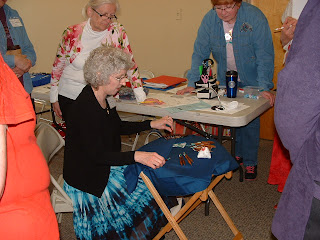 Posted by Sherry aka Celtic Dream Weaver at 9:00 PM

sounds awesome! I love the photo of Louise making the lace--it gives me (a non-lacemaker) an idea of how it's done.

If I get to the Islenos festival this year I'll take photos of the ladies making the tennerif lace to show you.

I have been told by some of my friends that Colgan is one of the best. I have seen her work and she is very good. I didn't know you even did bobbin lace! I love it, but have been doing more tatting lately than anything, but am going to get back into doing it soon. I am teaching a lady the basics of bobbin lace however...good luck with yours. It's looking pretty good!

Talk about yourself in 5 to 10 lines max: For example (without obligation): Age - number of years of lacemaking - the types of lace you make (Bucks – Needle lace – Blond lace - Cluny - frivolity - etc.) You teach lace - you organize or participate in exhibitions - you have a workshop - you are a collector - (But be brief!) …

Required photos with very good resolution (*) 1 or 2 or 3 of your best work with lace, brief explanations of your work, and for example, the time spent and / or difficulties and / or type of thread.... And / or detail that you would like to highlight.
Origin of the model: (Name of the magazine or book with name of person who made the design and pricking): "It is important to acknowledge the author of the pattern ..." and if you have changed it in any way.
Remember that all this must fit on one page A4 (21cm X 29 cm) - a beautiful picture is worth a page of writing - I can adjust the photos so that everything fits on the page.

If you create models, I offer one (or two) more pages to publish a model of your design with the technical details needed to make it (type of lace - thread to use - Number of bobbins - ...) and a photo of the realization.

Limited space (between 150 and 250 lacemakers for "1001 lacemakers" Volume 1). The pages will be assigned in the order of arrival of this "contract" signed (the documents may be sent now, or before February 1, 2016)
Michel Bouvot, the author, reserves the right to refuse any information or photograph deemed not in accordance with the spirit of this book, or too large, or arriving late, or insufficient size to be printed or reduce the text content exceeding 10 lines (Arial 11).

This page will represent your work, so take your time to make beautiful pictures!