Can't let myself get too stale huh??? I have got to write once in awhile ...Right? So here I am writing ...but I don't have much to write about....but I do have a picture to share. I have been working on cross stitch and tatting ornaments for my children this year. This design is by Country Cottage Needleworks and ws in 2008 Just Cross Stitch Ornament Issue. The edging on the cross stitch piece is "Black Magic" design by Mary Konior.This is slow going...for I don't have a ton of time. ....Yeah...I know I am home 24/7...but I watch my grandchildren almost everyday...and that takes time....and lots of interruptions.

Christmas is coming...are you ready?? I am not. Since we are so broke right now because of my husband being out of work since April things have been really tough this year...but we are surviving. My husband has found a new job. Isn't that great news. He has just started so not too sure how things will go...He will not be making what he did at his old job,but at least he doesn't have to drive about an hour one way to get to work like he did with his job of over 30 years. Now it takes him an half of the hour so we will save some money with him not driving and burning so much gas getting to work.
I did get a surprise in the mail today. Some cross stitch charts that the designer was so nice to send to me as a gift. I couldn't believe it when I got them. There were five in the envelope. And I really wanted these patterns too. What a shock!! They certainly brightened up my day. I got the envelope this afternoon but I was really busy today and so I decided I would wait to open it (though I didn't know what the envelope was) after I got my work done and the Grandkids when home so I could have my cup of International coffee and put my feet up and sigh...and then open the envelope. So I am in a pretty good mood still. :)
Earlier this week I also received two packages. One is from my Secret Santa from the Tattinggoddess list. I picked it up...not too heavy, I do hear a bit of rattle when shaken...but I didn't do that too hard...and I have put it by my Hershey Ornament tree that I have sitting up on my husband's old fold down or rolled down desk that his father made when he was very young. I think that desk means more to him than anything else in the house.
I also got a package from Carol Amich. Carol and I always do exchanges on Halloweenie...and Christmas. That Package is also next to the Secret Santa package under the same tree. This is a shoe size box. Nothing rattles...hmmm...it isn't too heavy but I would say heavier than the Secret Santa one...Yup...I compared the two as far as weight goes....LOL...
Christmas is coming and we haven't even started our Christmas shopping though we do have one gift for my youngest son...otherwise...nothing has been bought and I don't know where we will get the money to buy anymore gifts but we will do the best we can.
Christmas will be at my house for the family celebration as usual. I always make Christmas cookies...and HOmemade and I mean yeast and dough rising Cinnamon rolls. Both of these goodies have become a tradition. I did say that maybe I wouldn't make the rolls since it takes me all day and I end up with flour in my hair to got with my already gray hair. I do need to get the dye in my hair again....but it is finding time to do it...Of coarse besides the goodies I will bake...I always do the dinner too. I will do the dinner always though if that means I can get all my children and grandchildren here...I BRING out the food and they come.
Now I will leave you with just a couple pictures. One is one of ornaments I made and in the other picture is a picture of me and my youngest Grandson Peyton at Eastview Mall. Chrystal wanted me to come with her to the Mall but Peyton just wanted to go home. Come to find out he has another cold and pressure behind his ears. I took him to the Doctor's yesterday morning for Chrystal since she had to work.
Enjoy the pictures. 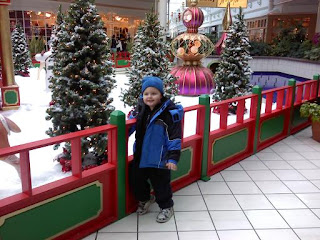 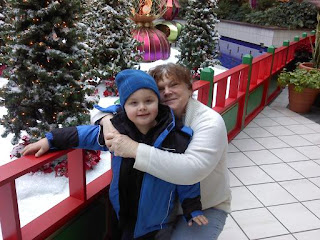 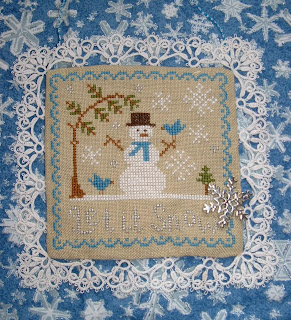 Posted by Sherry aka Celtic Dream Weaver at 11:59 PM

So glad Gary got a job!! GOOD NEWS! Hope it pans out for him and the family.
THose are cute pictures!

Interesting....my word verification to post a comment is "tationiz". Must mean "one who comments about tatting" LOL!

Peyton is such a little man now! I can't believe how he's grown. I also love the snowman. Purdy!

Have a great Christmas with your family.

The cross-stitch photo is overlapping the other photos. Can you move it? Lovely work.

Hiya Pene, The cross stitch picture is just sitting on top of an piece of material that I used for background is all.