Today's subject is TENERIFFE LACE which is made with thread and a flattened wheel of some sort and a needle. Teneriffe can be made into circles, squares, flowered shaped and so on. It is made with thread and a needle...and the form onto which you stitch around threads in such a way that a design is made. All the first stitches formed are held in place with pins that come into the side of the wheel. In the pictures I am going to show you, you will see what I mean. Once the lace is finished on the wheel you remove the pins and your lace will come off. Sometimes this lace is done on a tiny pillow too...I have never used a pillow myself...but who knows...if I ever decided to really get into it again someday...I might...just to see how elaborate I can get.
Anyhoo...here is a picture of some teneriffe circles I have done and also one that is shaped differently looking like a flower sorta. At one time I was planning on making a collar using black thread. That is why so many of them are in black...It is a UFO that hasn't been realized to the finish yet. 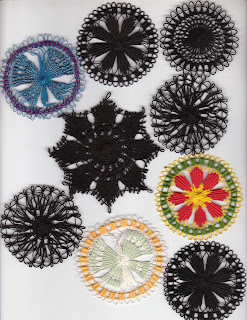 In the next set of pictures is A set of Teneriffe Wheels that I actually bought in Plymouth, England from an Antique store that I went into while I was there. Even then I was on the look out for anything that might satisfy my lacing hunger. I also bought a lace bobbin in York too...but that is another story.... 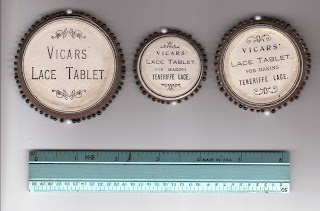 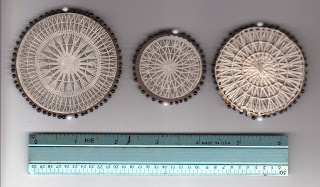 You can see there is three different sizes. This was marked circa 1901. They are in pretty good shape. I am showing you the front side and the other side of the wheels. As you can see one of the wheels actually has the finished lace on it...it was this way and I never did take the lace off the wheel. The price sticker is still on the package so I paid 15 sterling pounds for these lace making tools. Nowadays I think that comes to about $30.00 of American money but back then it was about $23.00 of American Money.
Also with the wheels was the original instructions. The paper has yellowed...but still very much intact. Since this is over a hundred years old I scanned it and here it is... It tells and shows you how the lace is made. Note the same wheels in the instructions as I have. In the third picture you can see the pins and how the threads are wrapped around the pins going from side to side around the wheel. The stitches are then made around the thread spokes. 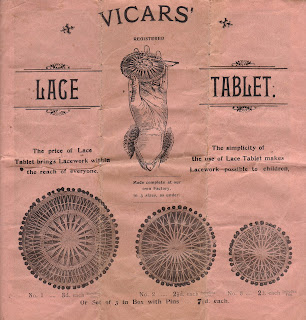 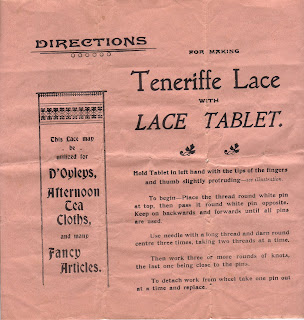 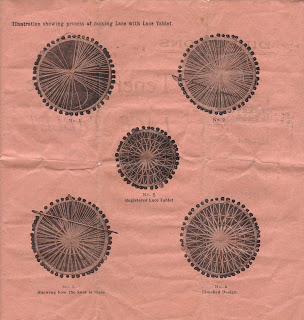 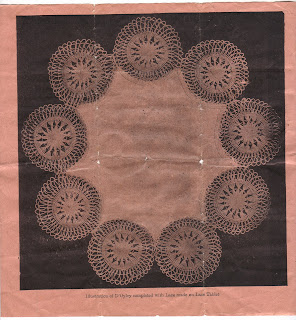 I also have a brass wheel where you turn the knob the spikes come out from the outside. Again the needle and thread goes around these pins and then you do the filling decorated stitches to the spokes of the threads. In looking at this contraption when the spikes are out...the tool looks down right sinister. LOL. 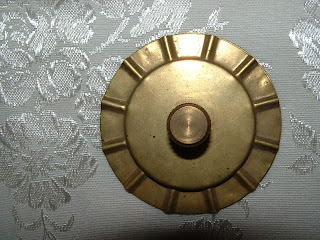 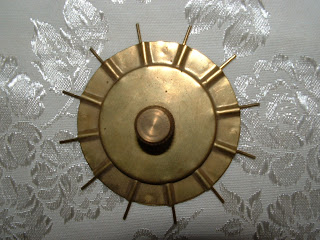 I also have a kit of Teneriffe Wheels that are made from Plastic Canvas. I got these from Lacis years ago. I must say that I like my home made wheels better that I made from heavy cardboard that I covered with vanilla folders better.
I do have some reference books for Teneriffe Lace. There is one thing about me...when I want to learn something or if I take a class in something I really do alot of research on my own after the class is over and I very steadily will work on whatever class I have taken. As with the Teneriffe Lace for instance. I did take a class on the fundamentals of making this kind of lace in Amhearst, New York years ago. My teacher was Joan Sulecki. Who was a great teacher and her mother has gotten awards from IOLI for her laces that she has entered in to competition. Love her Carrickmacross especially.
The books that I have are...hardcover "The techniques of Teneriffe Lace" by Alexandra Stillwell, "Teneriffe Lace" edited by Jules and Kaethe Kliot( paper) and a "Polka Spider Web Patterns", which is also in paper. In looking at these books this evening I had forgotten how truly beautiful Teneriffe Lace is.
In reading Jane Eborall's blog post http://janeeborall.blogspot.com/ I thought I would share with you too about Teneriffe Lace.
In the last picture I am showing you a hankie that I bought years ago. It has Teneriffe all around the outside....two rows of it actually and in the cloth portion is open work cut needled weaved docorations. I use to have this all pressed and on the center of my diningroom table as a center piece. That is how beautiful this piece is actually when pressed. Nowadays...I use my diningroom table mainly to put things that I don't want my grandson to get his hands on...like whatever I am working on at the moment...my candle holders and so on...so NO I don't eat at my table very often. 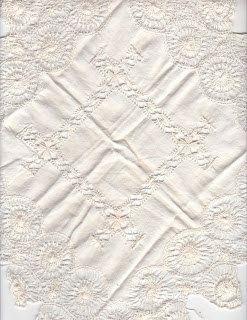 Anyhow...I hope you have enjoyed this posting and maybe have learned something from it.
Posted by Sherry aka Celtic Dream Weaver at 6:24 PM

VERY interesting. Thanks for that posting. I don't think I'll ever try it, though!!! Lovely work.
JaneEb

I am "tagging" you, Sherry! Hope you don't mind. You can see the rules for this thing (it's been going around) at my blog post for Oct. 22.
Marilee

I did learn a lot. Thank you for sharing. I have a set of plastic tools with a knob and those little spikes that retract. I've had them since I was a kid. I'll have to pull them out again.

HI! Just stumbled into your blog while doing a check of results from searching "teneriffe lace tool". I was originally taught Teneriffe in a class about 12-15 years ago. I played with it some in between but when a recent discussion came up at InTatters I thought I would dig my supplies out and do some "serious" research. Terrific report- and I did learn something- those "tablets" you found are something I've never seen before. I am now working to make a small collection of various different Teneriffe lace tools, so it was neat to read about them.