My Halloween post....I know it is after Halloween....so lets call this post
"The Nightmare Before Christmas"
I decided to do an Halloween exchange with someone who I feel enjoys Halloween as much as I do. I got my exchange from Carol Amich way long time ago...but I just put the package in my antique wicker tea table. No I don't drink tea...hate it actually...isn't that kinda funny being English and Irish...but it is the truth...but give me a nice cup of coffee or cocoa and I am there. Anyhow....I felt I couldn't open Carol's package until I mailed her exchange off to her. I wanted to do something really I hoped was nice since she sent me Eli...which is pictures on another one of my blog posts somewhere. I made her a witch. This witch took me forever to make. I baby sit Monday through Friday my little grandson Peyton...and he doesn't give me much time for tatting...so I just kept working at it as much as I could. The other problem was I wanted to make two of them...so I would have one here so I could figure out what I did. Usually when I design something I design it as I go from a picture I keep seeing in my head. Sometime it looks like what is in my head and most of the time it doesn't...but I like designing just the same. So there I was making two identical witches. Halloween was coming and coming closer....and I just knew I wouldn't get it done in time.....so......I had to send Carol an email letting her know that her exchange wouldn't make it to her house before Halloween.
I know Carol got the package from me today for I got an email from her. Maybe she can share with you her thoughts of her witch named Miranda. My witches name is Madeline. I made them so the witches would look like they are trick or treating...note their trick or treat bags...complete with chocolate ...and not Carol's witch...she had bats on her bag. I did that intentionally. I wonder is she noticed the bats on her bag.
I painted their faces...and their dress are completely tatted. I also tatted their hats and them put them both together. The witches stand up with some encouragement. My witch is keeping company with Eli the elf right now. LOL
Carol sent me some candy...including a candy necklace and bracelet which I am giving to Timmy Guy...I am keeping the Peanut M&Ms for myself. LOL She also sent me her cool Halloween designs that she I think has shown around. Here is a picture of them.


Anyhow they were fun to make...and now I have moved onto Christmas exchanges...I wonder what I will do for them....hmmmmm.....I am not telling ...it is a wait and see for all of you.
Here are some pictures of the witches. Enjoy looking at them.... 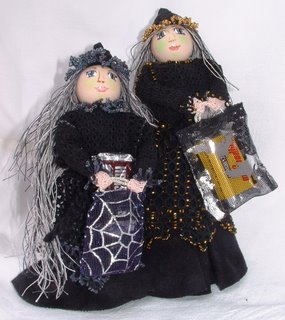 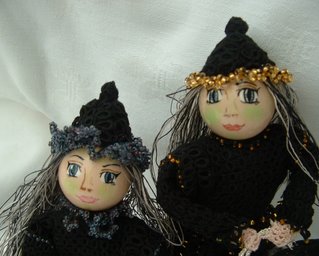 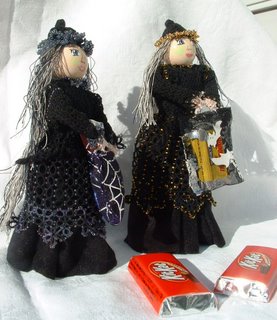 Posted by Sherry aka Celtic Dream Weaver at 2:47 PM