I Just finished my Milanese Heart over the weekend. I am happy with my color choice that I used to make the heart. Erin...how is your heart coming along???? 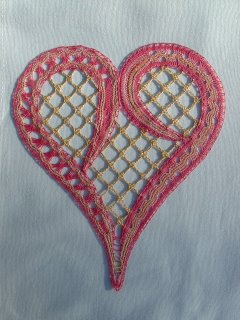 I also got a couple of neato surprises in the mail. The first surprise was a package from Carol Amich in Indiana. The story goes like this...On Friday my daughter retrieved the mail for me. She came in the house with a package ...and she said to me...Mom, who is your Fairy Godmother? I didn't have a clue as to what she was talking about so I took the package from her and sure enough it said for return sender Fairy Godmother with a happy face drawn out after it. I really didn't know...but then I opened the package....and I was soooo very muchly surprised for here was one of Carol's magical Elves. My elf doesn't have any wings yet...Carol said he was a "UFO" and suggested that I finish him and make him truly my own Elf. I tell you I was so surprised. Carol has made different scultured tatting items recently, dragons, birds, monkees and all kinds of things...but the one scultured piece or art that she made that I just loved was the Elf. I have been writing to Carol trying to figure out how I could make one of my own for I really wanted one. Carol stated..there was no pattern ...and after seeing the Elf guy...I can see why. I asked her if she took any pictures while making the elf...nope...no pictures...I thought if there were pictures during the making...that maybe I could create one of my own...but there were no pictures....I asked her if she sold any elves on ebay only because I knew she had sold some of her art on there...I think she said no.

I think Carol took pity on me and she made this little guy and sent him to me. My very own Carol Amich aka Battater. He is so cute. In studing him...he has sculptured eyebrows believe it or not...and sculptured ears...and blue eyes using one of those white and colored beads...if you know what kind of beads I am talking about...and he is even in colors that I love...and take a look at his hairdoo....He is going to be fun finishing....and when I get him finished...I will again post a picture of him. He is too cute. I had to call Carol right up...and chit chat with her. Carol also loves Halloween like I do....it was fun talking to her...which we talked for awhile...my hand was falling asleep...LOL. Here is a couple pictures of my Elf Guy. 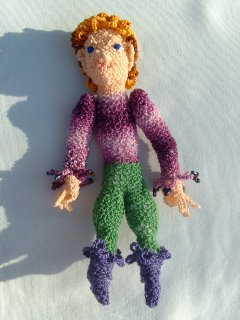 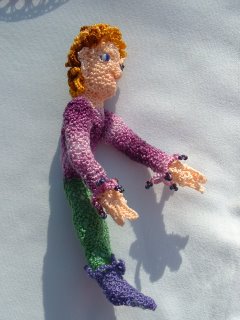 Then I got another

surprise in the mail. This

Surprise was from Gina

Brummett. It was a

book that Gina had got-

ton for her grandchild-

ren and noticed it was

going in a garage sale.

Gina thought of me

and I guess my love of dragons...and recused the book and mailed it to me. It is a really cool book with pictures of dragons of all kinds. There is even a picture of a dragon that was put together with everything but the kitchen sink...which I bet if I look closer at the dragon picture I will see a sink. In that picture there is a clothes washer with ...believe it or not a cat inside it...but it is a cute book that has dragon poems with each of the dragon pictures. Thank you Gina for thinking of me and sending it my way...it was a real surprise!!! Here is a picture of the cover of the book. 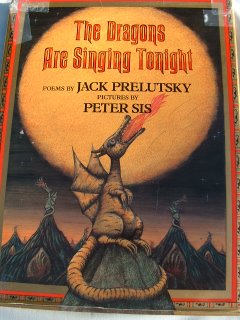 And now I have to close this blog entry with another picture of my grandson....and with at least one of my greatest creations of my own. So here is Peyton Lee ( my grandson) with my youngest son Ryan. Take a look at his hairdoo...he actually has reddish hair which he hates and keeps his hair cut short...lately he has been getting the top of his head dyed...the really...really blonde look.

What a couple of good looking guys huh??? 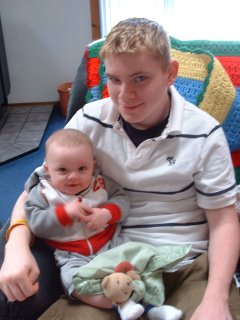 Posted by Sherry aka Celtic Dream Weaver at 9:02 AM

Wow - that heart is stunning.

Okay - how's mine? Last night I took out the part back to the periwinkle part and restarted that section again. I'm stuck on the backstitch part. Or the stackbitch part. Whatever.

What cuties! I love the elf - you're going to have such fun finishing! And the other two cuties - aren't you a lucky thing?