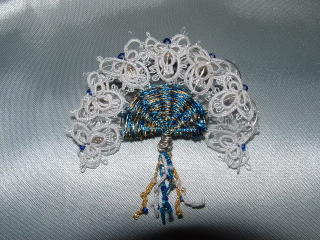 Well....yesterday I spent the whole day making Rita's Fan from Palmetto's Tat Day event. I thought I could get it done just like that....but mistakes were made and starting over was also done a few times in making the top edging to the fan. The thread used for the top of the fan is white silk thread. The bottom part of the fan was made with Oren Bayan metallic thread. You can get both the thread and maybe the fan skeleton from Rita if you would like to make a fan like mine. Her email address is:
threads@execulink.com
I did do the fan differently than the instructions originally called for. For one instead of making the top of the fan in separate elements or motifs...I connected them together using the side picots and on the ends of the top of the fan are also connected together. So it ended up being a continous edging on top of the fan. Anyhow...it was on my list to make...so I can now scratch off one "to do" off my very long list.
I thought I would share some pictures of some shuttles that I have decorated too...so enjoy the pictures. As usual...I would love to hear from my lacing friends. Note the one with the pansies...those are real pansies. 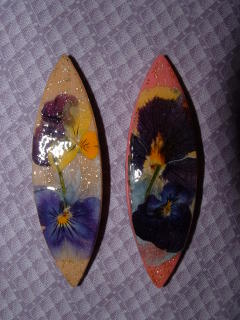 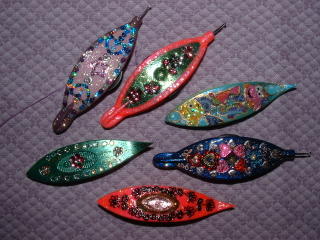 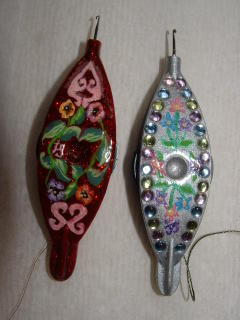 Posted by Sherry aka Celtic Dream Weaver at 7:54 AM

Your blog is wonderful! I will check it often to see what you are up to

I'm so impressed--all your work is so good. Best regards, Sue from way off in Texas

The tatting shuttle with the real pansies is quite lovely!
WoW!