Gee whiz....it has been a short while since I posted. I haven't had much to post about lately. But this weekend was a busy weekend for me and nice. My baby Ryan who is 21 graduated from college officially. He is transferring to R.I.T in the fall. I am so proud of him and he paid his own way going to college too...but next year it will be different RIT is a more expensive college. He is majoring in Computer Science. I think he wants to evenutally get into animation with computers....maybe doing the software or whatever needs to be done to make games for the very expensive game players like PS2 and Xbox and so on. 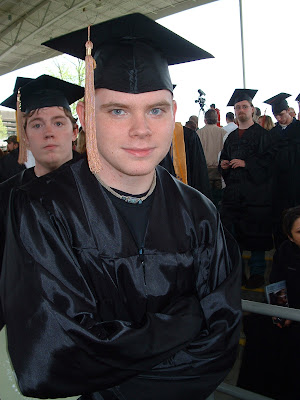 Here he is graduating.

I also managed to get a family picture too. Here that is...don't pay attention to the Wicked Witch in the West Stunt double there. 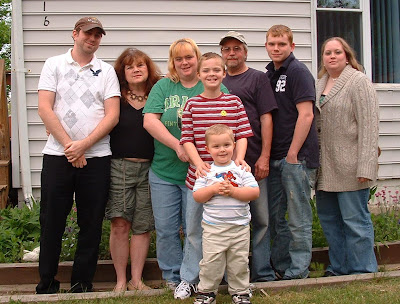 And here is a picture of just my Handsome Sons....Shawn and Ryan. 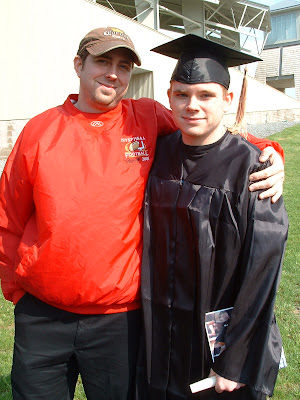 We had a family cookout after the graduation. I should also tell you we all froze to death almost. We also had wind and the rain was coming into the shell ( which is a place where alot of concerts are in the Summertime. It was a good day for by the time we got home from the Graduation Ceremony the rain had stopped even though it was still cold outside. Today's high is suppose to be only 48....and I think it feels that cold.
Yesterday being Sunday I went to my Lace Guild meeting. I hadn't been there in about a year. But I borrowed my son's car and drove to Ithaca and had a nice time at the meeting. Someone had donated some linens to the Guild members and we were going around and going around the room. We each had a number. Mine was two so everytime it was two's turn I would go and pick something out. I did give some of the linens to my daughter Chrystal this morning.
Sorry I don't have any tatting to show at the moment. The only lacing I have done lately was to work on my pink edging on my Ms. Floozy's Pillow.
Till sometime in the future have fun and smell the roses.

Posted by Sherry aka Celtic Dream Weaver at 2:27 PM

Congratulations to Ryan. You have a lovely family and I know you are very proud of them!