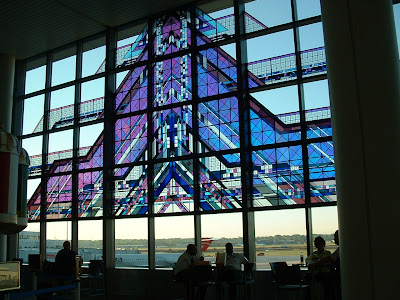 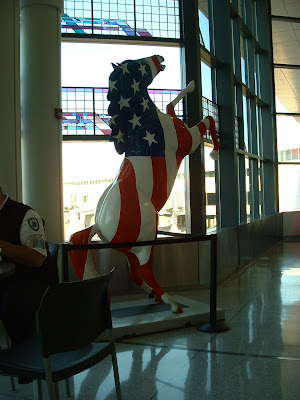 This is the begining of my trip...it started in Rochester, New York on September2nd.2008. It use to be before September 11th, happened that once you got your ticket you could walk anywhere in the airport. Now you can't. I can remember Mark Myers and I both walking around the airport and having a hot drink. Now in order to be infront of this stain glass window showing a jet you have to go through security first. Mark....do you remember the stain glass...how about you Erin?

In the other pictures here is a cool looking clock that use to be inside a big mall called Midtown Mall which was located downtown Rochester. On the half hour and hour the displays of different countries open up and all the displays go around.
Also here is one of the horses that some art class somewhere did. These same horses are all over Canandaigua and each one has a painted theme to it...like there is also one for fishing and has fish bait shops and so on all over the horse. 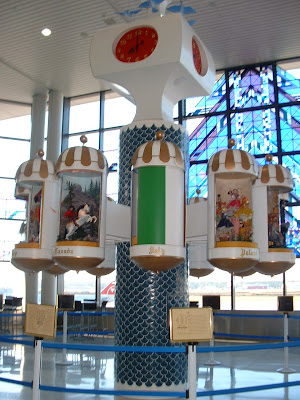 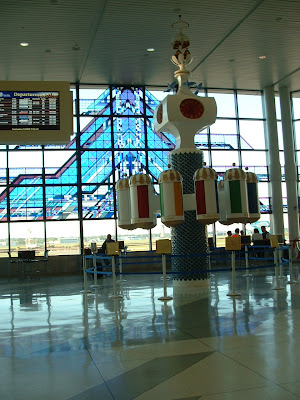 I can remember seeing this clock inside the mall when I was a little girl. I have been back to that mall since...but I do remember the clock.
I noticed that in Greater Rochester Airport they had different displays related to aviation. Hanging planes and the tower I believe. I noticed that O'Hara Airport also had a aviation display. 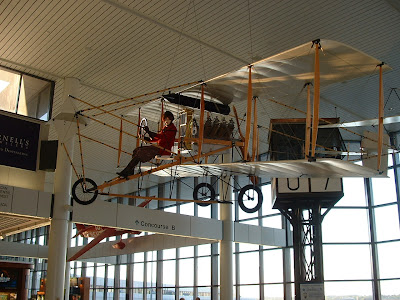 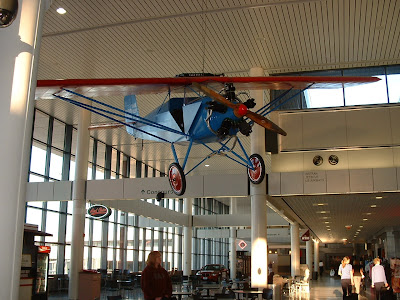 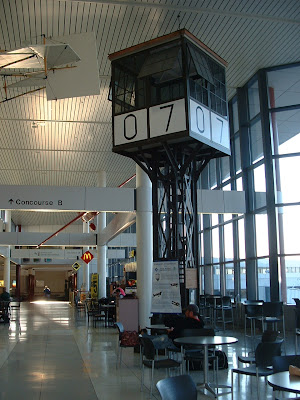 And take a lookie here...I think that is Chicago I see out my plane window...which means I was in the state of Il. I have been in Chicago a few times now...but just inside of O'Hara Airport is all. But here is a picture I took of a plane they had there and also the write up of the person that the airport is named for. but see Mark...I am waving to you from Chica 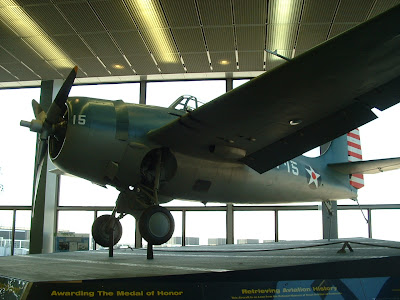 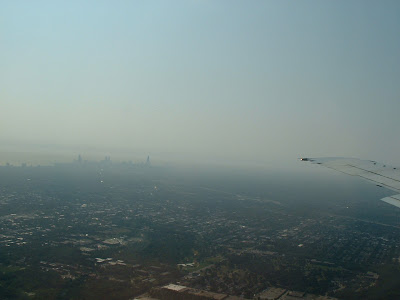 The first night at Erin's house we just vegatated we talked alot about tatting and what we were going to take with us and what classes we were going to take, read our email...lamented over the fact we didn't have Mark to pick on this year and so on. We were getting our tears all over our shuttles...
Part of the show and tell was a bobbinlace pillow. Back when I was sick this year I was doing alot of heave hoeing and selling stuff and I guess I was crazy ( more than usual that is) I sent and gave to Erin two pillows that I had and decided I didn't want any more. Both pillows needed some kind of work...Here is a picture of the antique French pillow I gave here. It looks so very beautiful now. I hope Erin finds time to make lace on it. But Erin did a terrific job on the pillow...kinda funny it isn't pink but more of my kind of colors huh?
The other pillow she is working on is going to be in pinks. 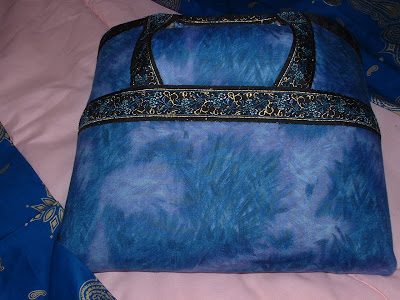 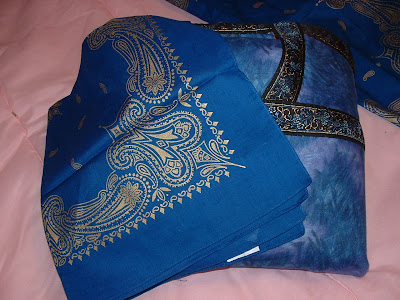 Posted by Sherry aka Celtic Dream Weaver at 9:43 PM

So nice to see pics of the start of your trip. YES I remember that stained glass window. It is awesome! That is a really nice pillow you gave Erin and she did an outstanding job of recovering it. Not that I know what it looked like before. But she is soooo lucky to have that and you are sooo nice to do that for her. She did do it in your colors. Feeling sorry you gave it up now? hehe
I will have to study how French pillows are made. I need to make one for my collection. :)

Well, we're going to have to take lots of measurements, Marky-Mark. I think we can certainly crank a few out. Heh!

We can start the "Carreau Dentelliers de Marky-Mark, Sherry and Erin". Sounds fancy, don't it?