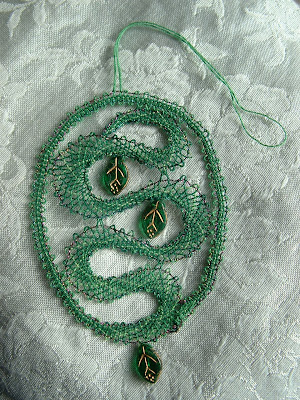 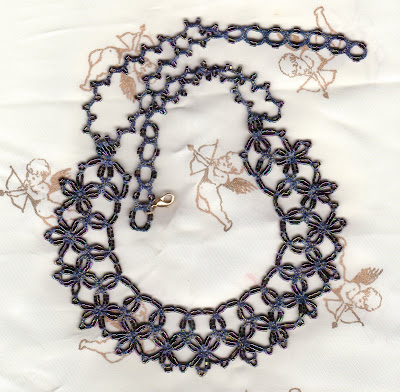 Couple pictures to show you. One is a necklace designed by Nina Libin that I made. I used HDT size 20"Royality" by Sherry Pence. I really like the dark purple to black in this colorway. It looks very close to one of my favorite Valdani colorway that I used for the ground in my Celtic Fan that I made years ago. There is a picture of my fan somewhere on this blog in the earlier entries. This fan was also on the front cover of IOLI bullentin once shown in color. Anyhow...I just got this finished. I started it a while ago....it has been picked up and put down a few times.
I have belonged to the Lace List "Arachne" for a long time. This was the first year I decided to join in on the Lace Christmas Card exchange. My partner was Alice Howell of Oregon. What I recieved from her is in the other picture here. It is a bobbin laced ornament. What I sent to her was in an earlier post which was the bobbinlace Christmas tree. I don't know but I might do it again next year.....now to go back to working on things...and listing some more stuff on ebay. I have lots of crochet books..hard covers and out of print...also cross stitch, Handanger which I love and a whole bunch of stuff to have money for Christmas shopping this year.
I love reading everybody else's blogs by the way. I read them every night before hitting the hay.
Posted by Sherry aka Celtic Dream Weaver at 5:31 PM

...reading blogs has become a daily ritual for me! It's fun huh?

Sherry,
I love that thread in your necklace. Great work!!!
Enjoy reading those blogs.. speaking of it, I need to get to mine..ah
Tanya

COOL bobbin lace ornament you got from Alice. I like the curvy trail designs and the added beads. And Of course I love Nina's designs. I think I have that Valdani thread you are talking about ;) NICE JOB!